This Slow Cooker Beef and Homemade Egg Noodles recipe is hearty, full of flavor, and SO comforting!  It’s a perfect meal for a chilly day! 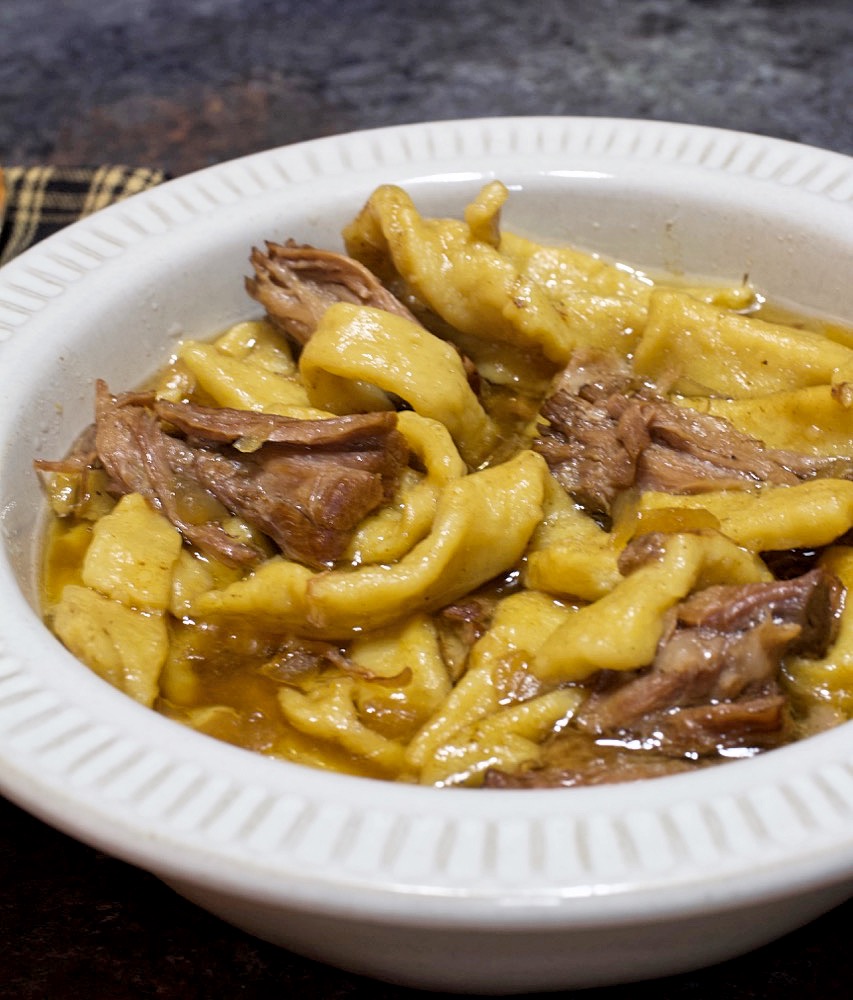 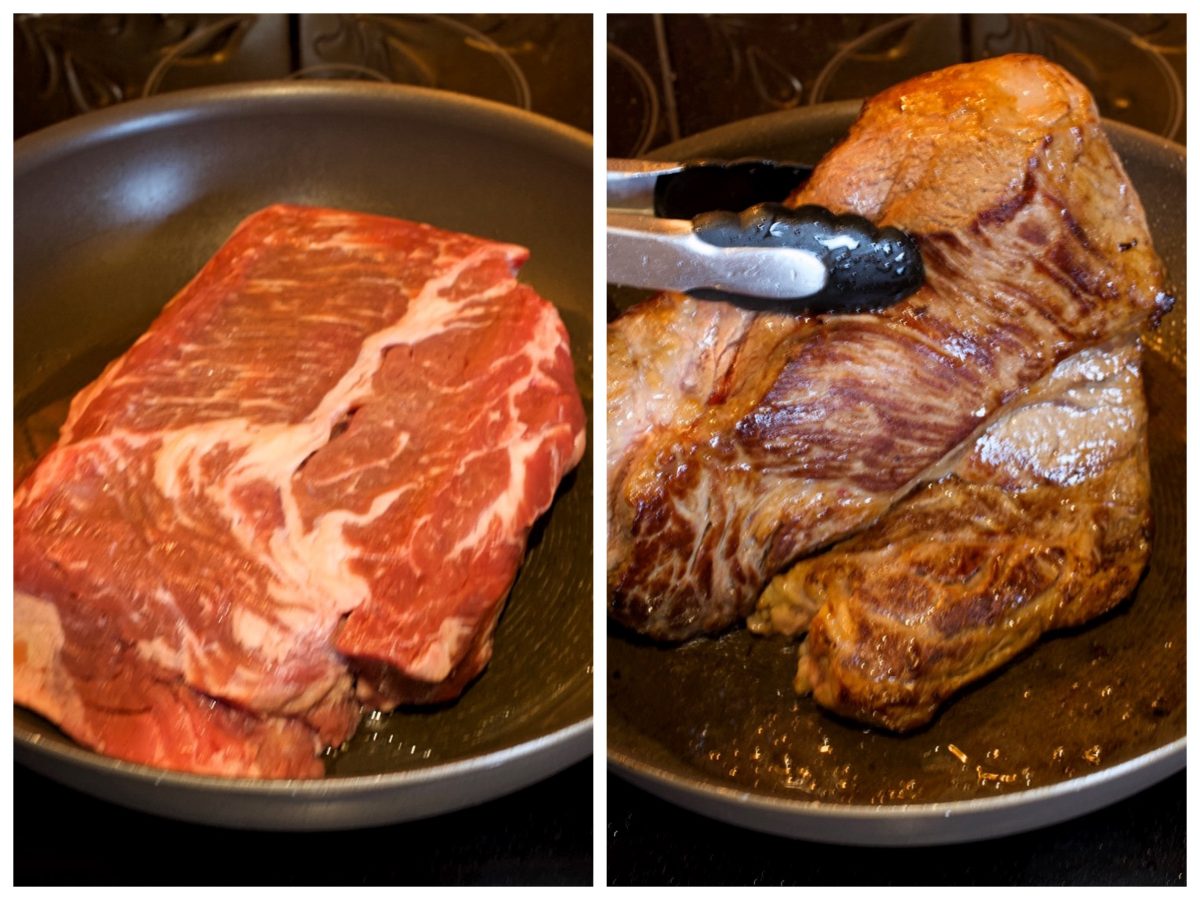 In case you’re confused between searing and braising meat, here’s the difference.  Searing is used on tender cuts of meat such as poultry and certain cuts of roasts.  The meat gets seared in little to no oil in a hot skillet until all sides and edges are golden brown.  The meat is cooked through the surface only.  Then it gets roasted in the oven or cooked in a crockpot.  Braising is used on tougher cuts of meat, such as rump roast, where the connective tissue needs to be melted in order to make the meat tender.  The meat needs to be cooked by moisture.  The meat is placed in a dish and covered halfway with stock.  Then the dish is covered and baked in a low oven until the meat is tender.

Old Fashioned homemade egg noodles are super easy to make.  They are made of flour, salt, water, and eggs.  There’s no milk or leavening here.  We’re not making drop dumplings here so we don’t need the noodles to rise and we don’t need milk.  The noodles will automatically expand when they get dropped into the hot broth. 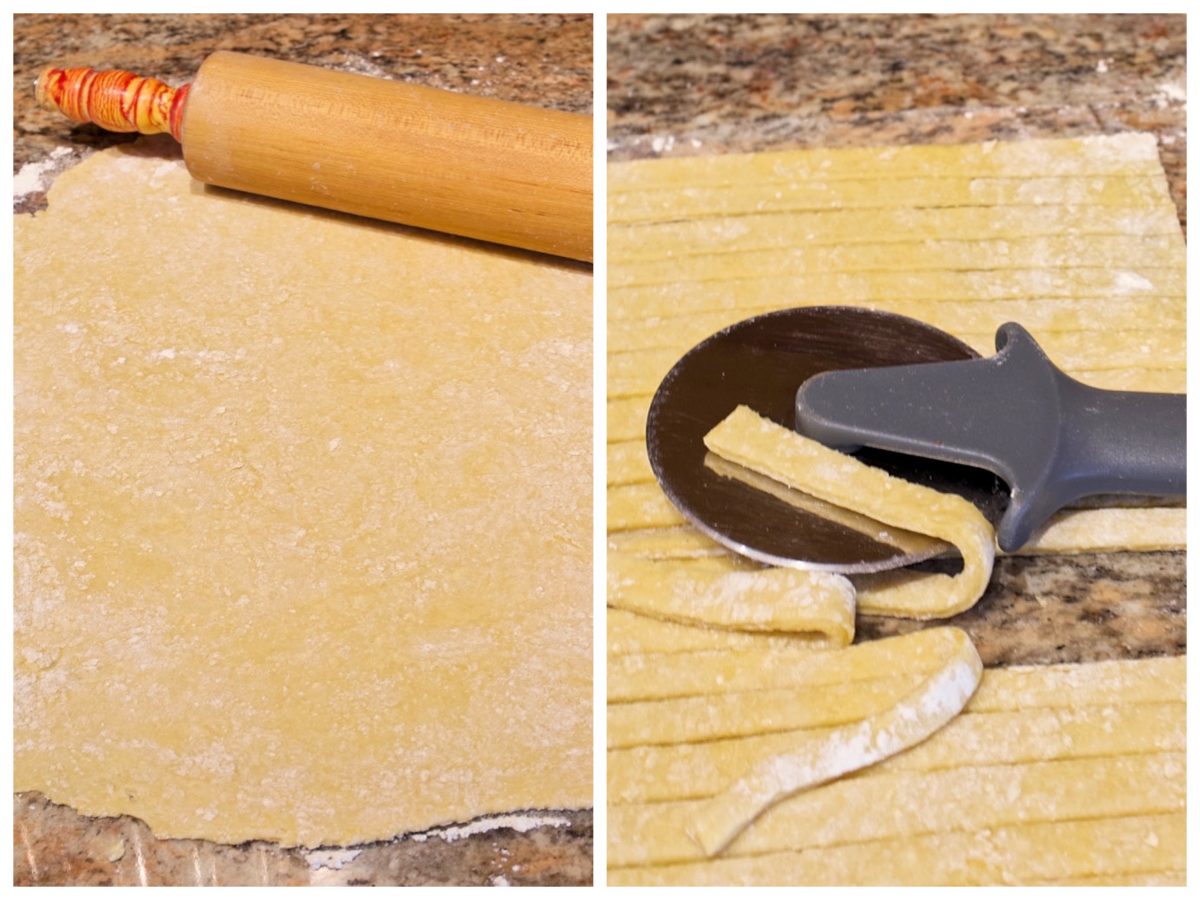 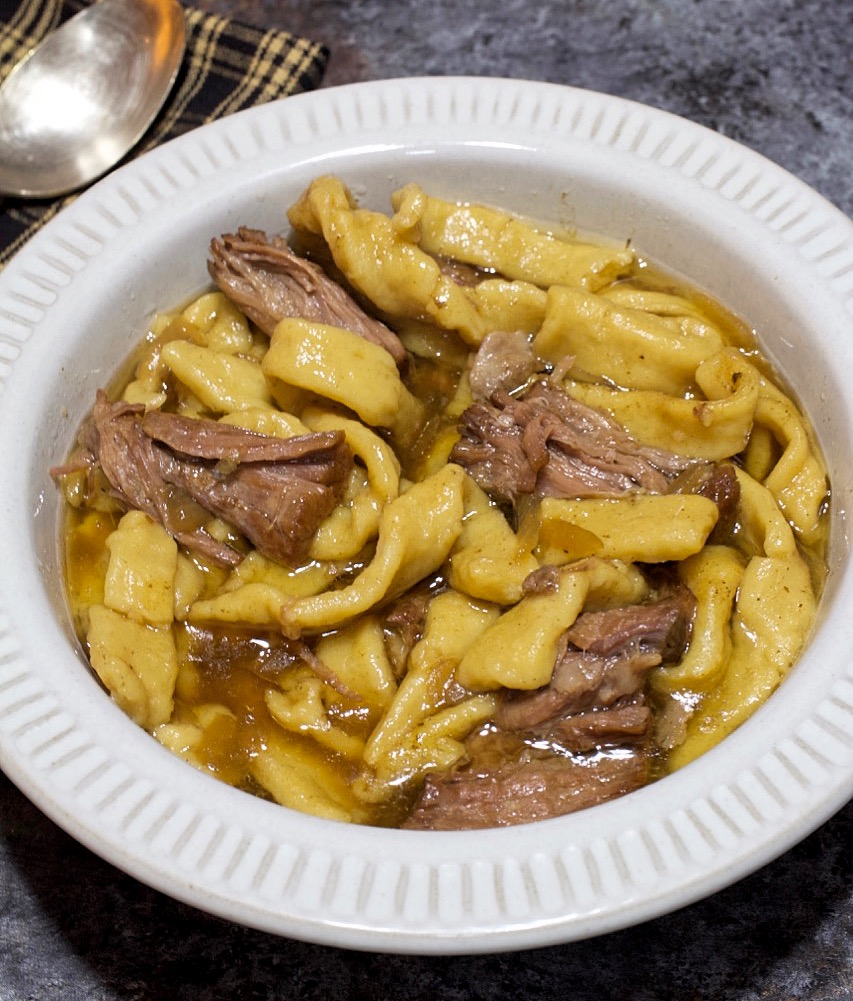 WHAT IS KITCHEN BOUQUET? 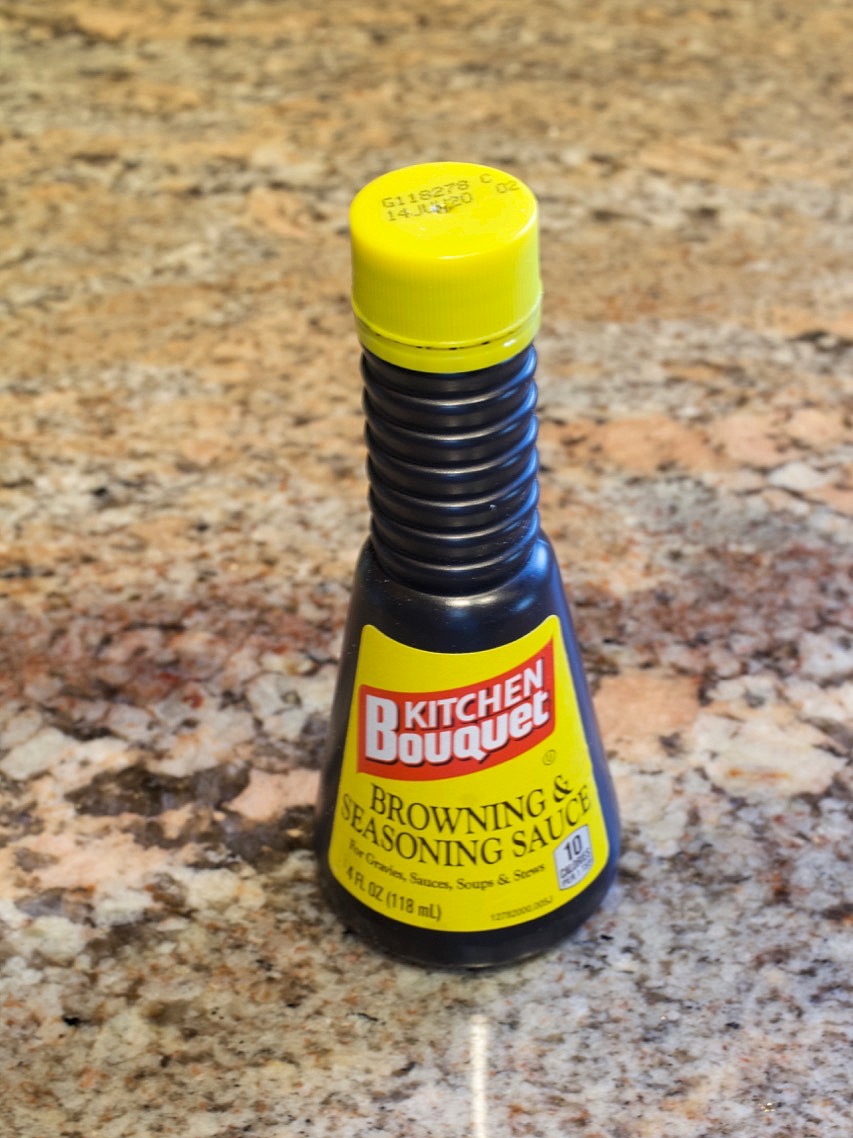 Kitchen Bouquet is a seasoning and browning agent used in meats, gravies, and sauces.  It’s made with herbs, spices, vegetables, and water.  Some think it has a mild beef flavor.  It adds a dark rich color to gravy and sauces.  It’s optional in this recipe, so if you don’t have it don’t worry.  Your roast will still taste great.  When shopping, look for Kitchen Bouquet in the spice aisle. 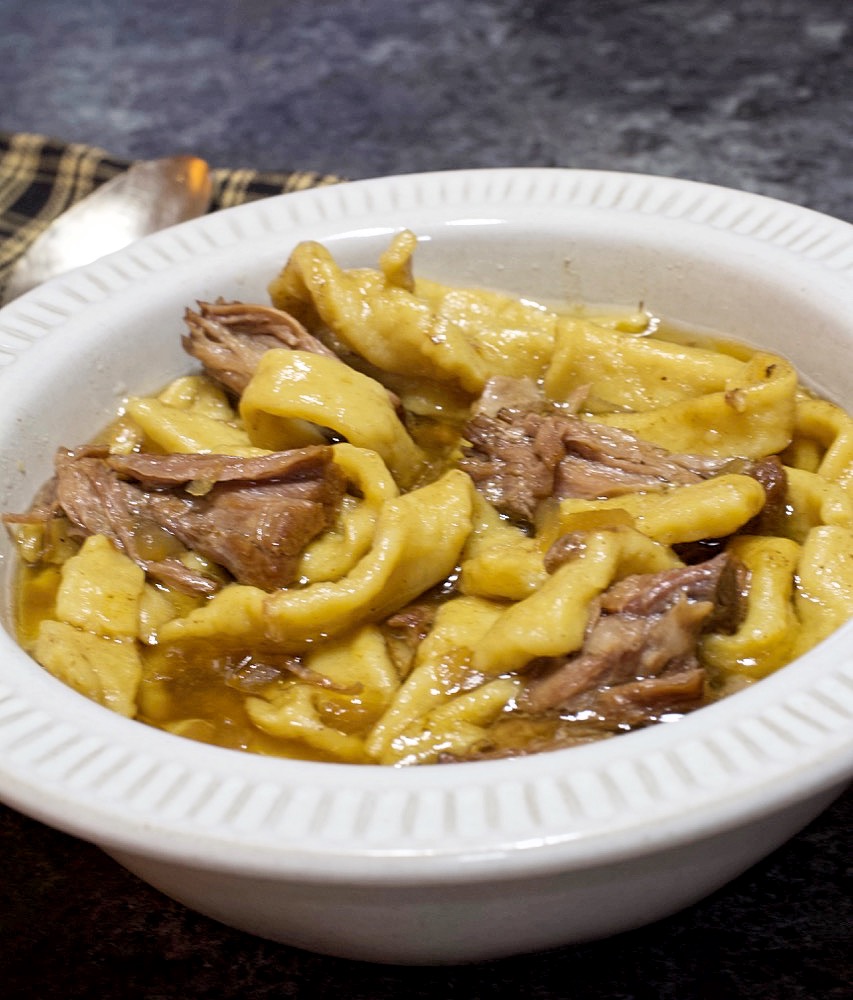 This Slow-Cooker Beef and Noodles recipe is perfect comfort food!!

This Slow Cooker Beef and Homemade Egg Noodles recipe is hearty, full of flavor, and SO comforting!  It’s a perfect meal for a chilly day!

FOR THE EGG NOODLES

FOR THE EGG NOODLES

END_OF_DOCUMENT_TOKEN_TO_BE_REPLACED
©2023 My Country Table. All Rights Reserved. Design by Purr.