END_OF_DOCUMENT_TOKEN_TO_BE_REPLACED

This Maple Cinnamon Crunch Ice Cream is made with pure maple syrup and fresh cream, and it’s loaded with bits of homemade crunchy cinnamon shortbread cookies.  It takes no time to make and It’s absolutely creamy and delicious!! 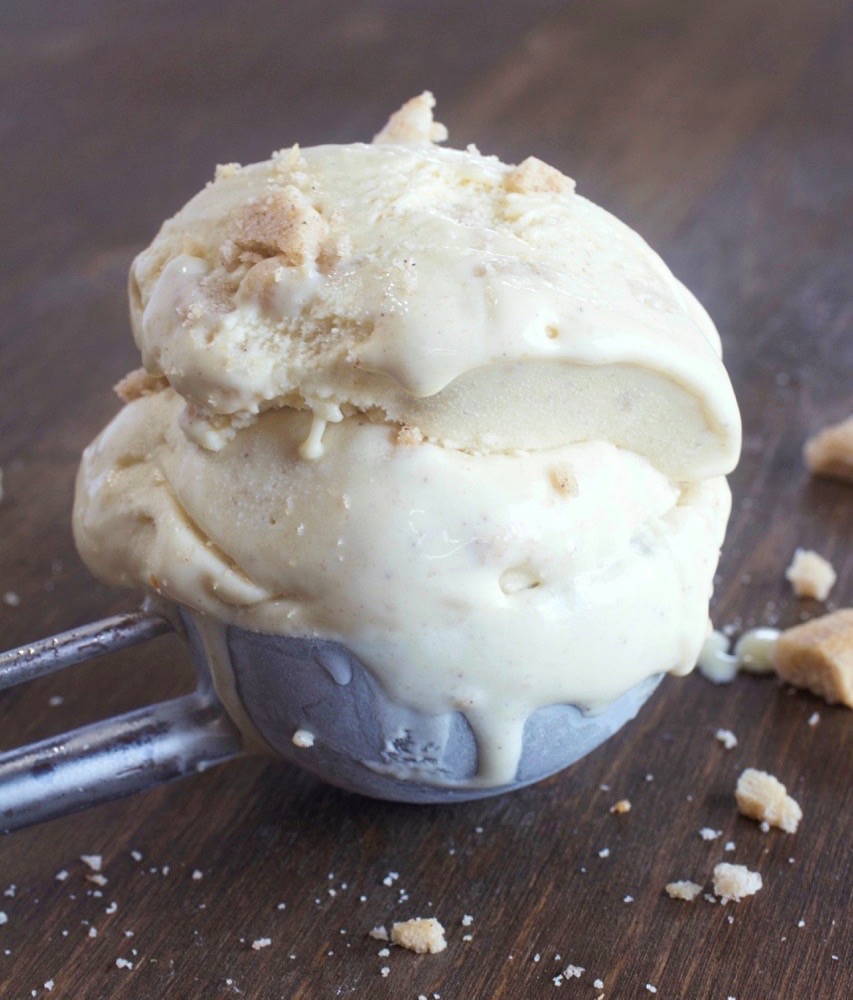 Last week I had an eye doctor appointment and it just so happened that the doctor’s office was right next door to our local Graeter’s Ice Cream Shop.  Graeter’s is well-known here in the Cincinnati area.  Me being the weak person that I am had already decided upon arrival that I would be making a visit next door after my eye appointment.

When I walked in the door, I was so amazed at all the different flavors of ice cream that I simply couldn’t choose.  That’s when I saw a sign advertising their newest flavor…Maple Cinnamon Crunch!   OMG!  Yes, I’ll have a scoop of that, please!   It was a little pricey at $4.50 a scoop so I thought to myself, this had better be the best ice cream that I have ever tasted.

Once I returned to my car, I took one bite while swooning over it.  Then I immediately started dissecting the wonderful creamy concoction.  A true maple flavor was definitely pronounced along with the rich flavor of pure cream.  Hidden inside were these little pieces of some sort of shortbread with a cinnamon taste…a true complement to the maple flavor.  I was totally in heaven.  I knew exactly what I had to do when I got home…replicate the recipe! 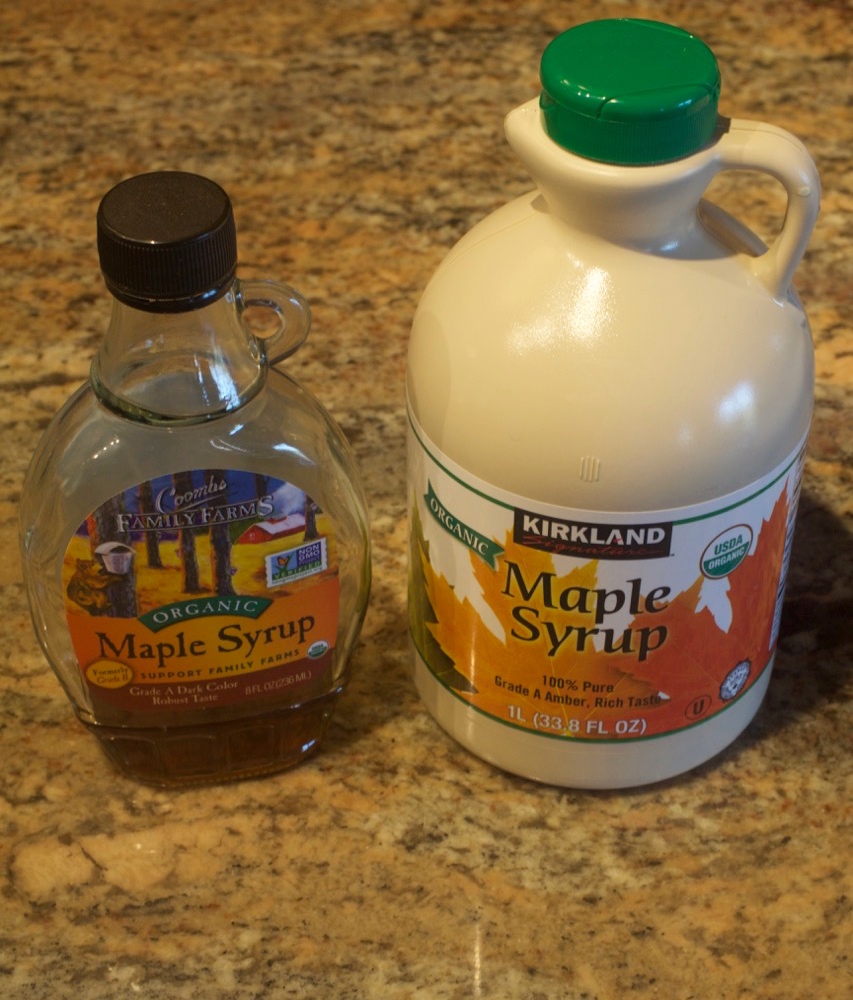 The first order of the day was figuring out how to make maple syrup the star of the show.

Note:  All organic pure maple syrups are not equal.  Trust me on this one.  A few weeks ago I tested two different organic maple syrups while making maple caramels.  There was no comparison.  The Kirkland syrup, pictured on the above right, had a true pronounced Maple flavor, whereas the Coombs Family Farm’s syrup, pictured on the above left, was sweet with just a hint of maple flavor.  The Coombs syrup was hardly recognizable in my caramels. 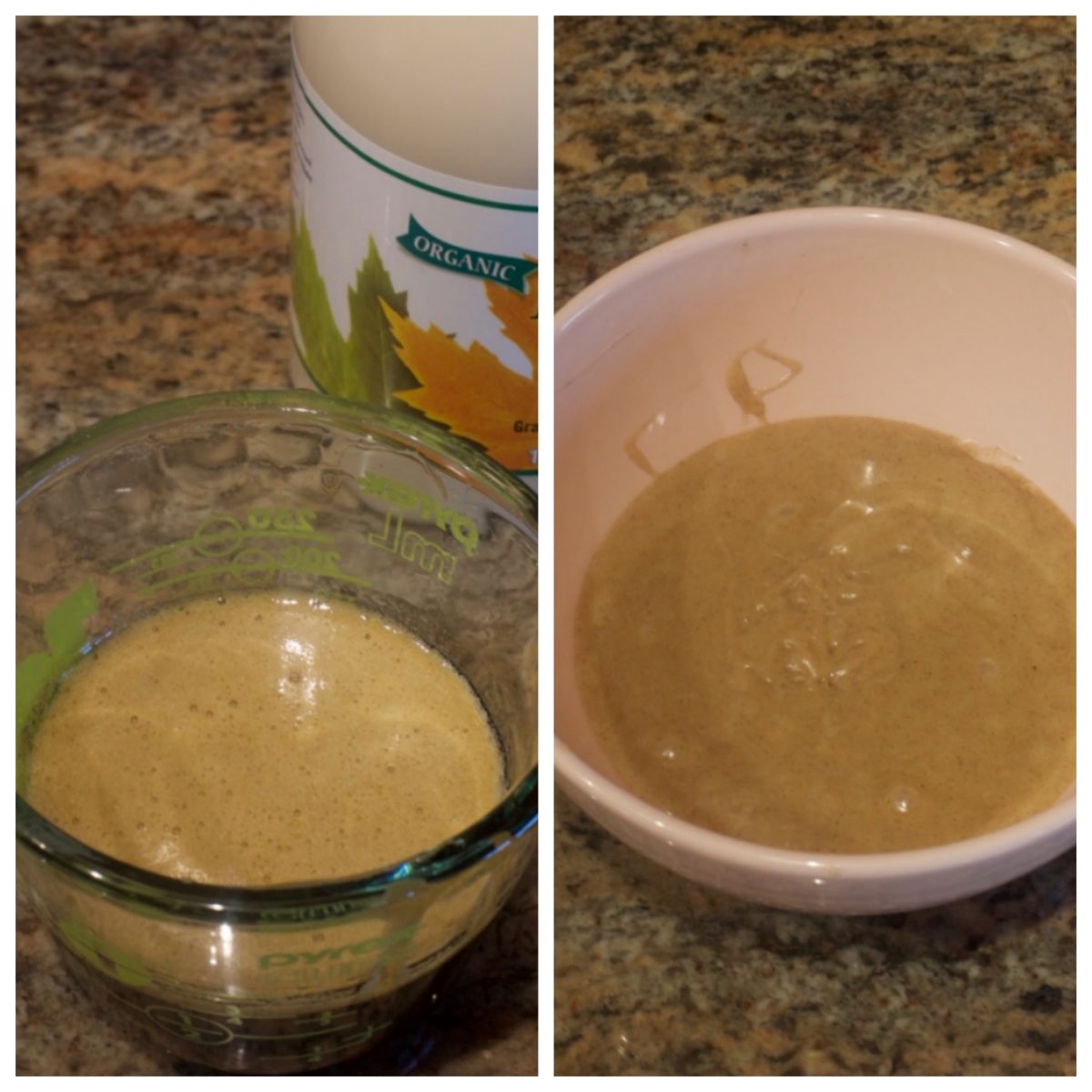 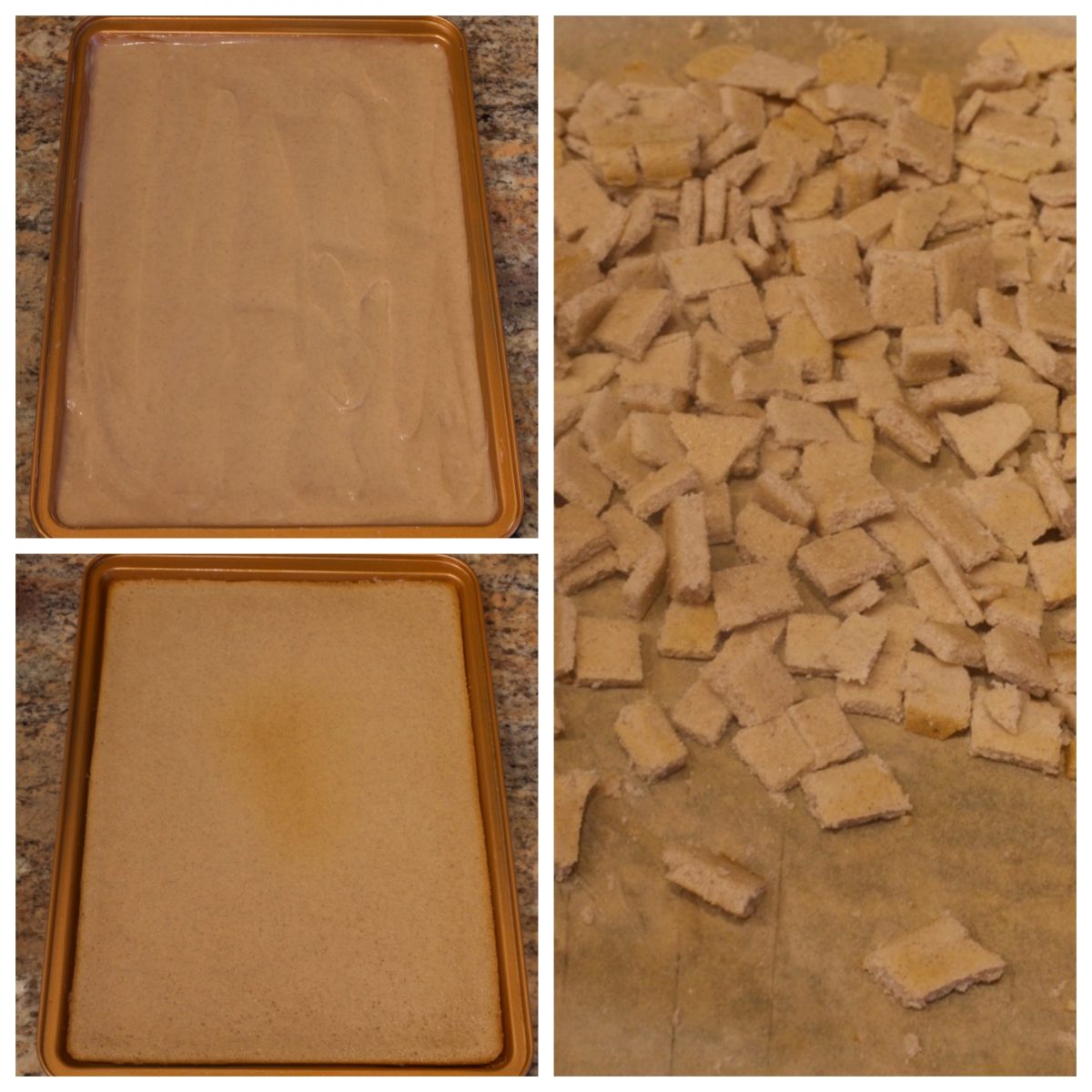 The next thing I needed to do was to figure out the shortbread cookie part of the recipe.  I knew it was very thin and had a cinnamon flavor.  So instead of experimenting with shortbread recipes, I just made it easy on myself.  I borrowed a simple recipe from Food Network and increased the cinnamon.  It took just minutes to mix up and bake. It was thin and cinnamony and more than enough to put in an ice cream recipe.  Perfect!  I cut the cooled cookie into small squares, about the size of cinnamon toast crunch cereal, which by the way, would also work well in this recipe, especially if you want extra crunchiness. 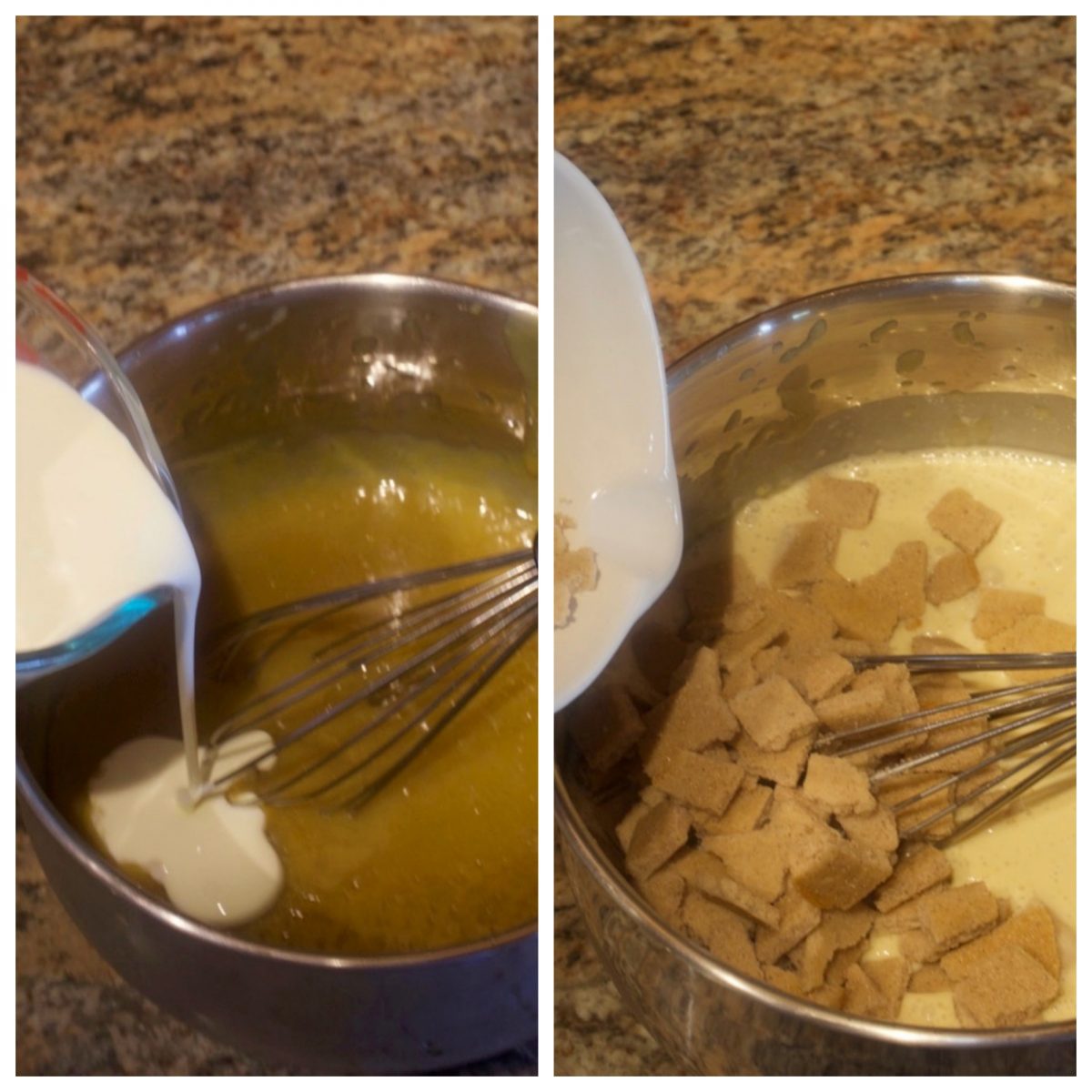 Once I reduced the syrup I set it aside and started working on my custard for the ice cream.   Here’s all I did…

Now it was ready for the ice cream maker… 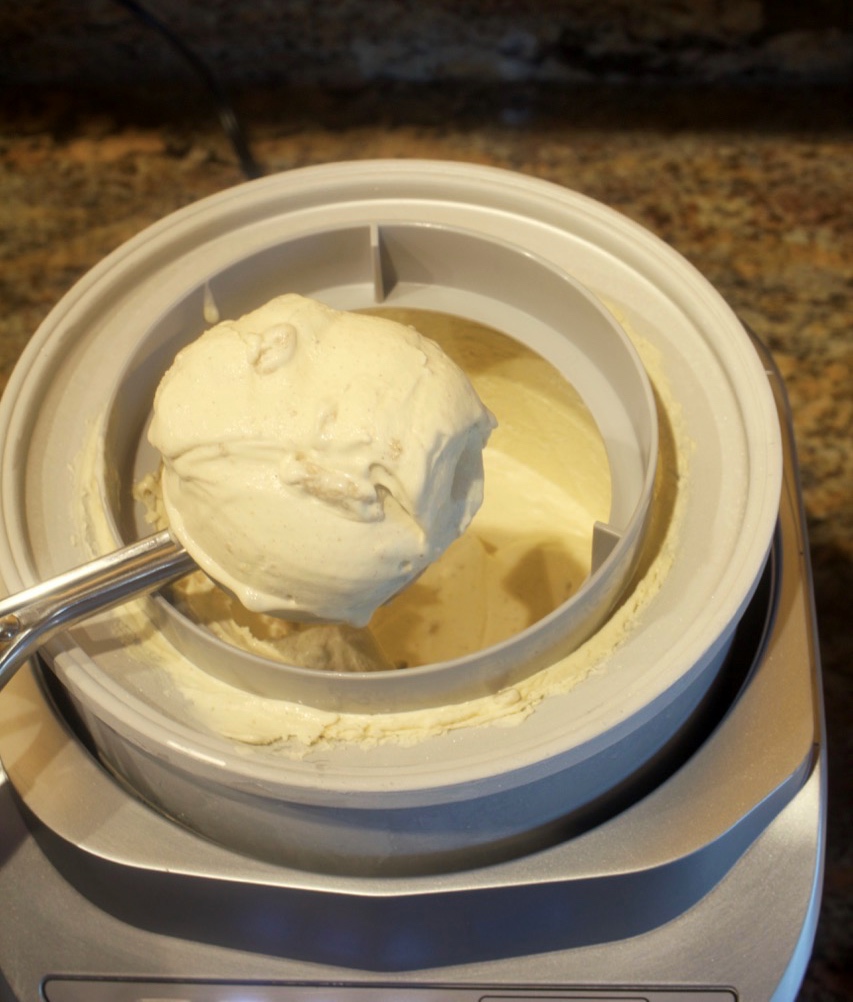 Twenty-five minutes later, I had the most creamy and delicious maple-flavored ice cream ever!  The little pieces of cookie just sent it right on over the top! 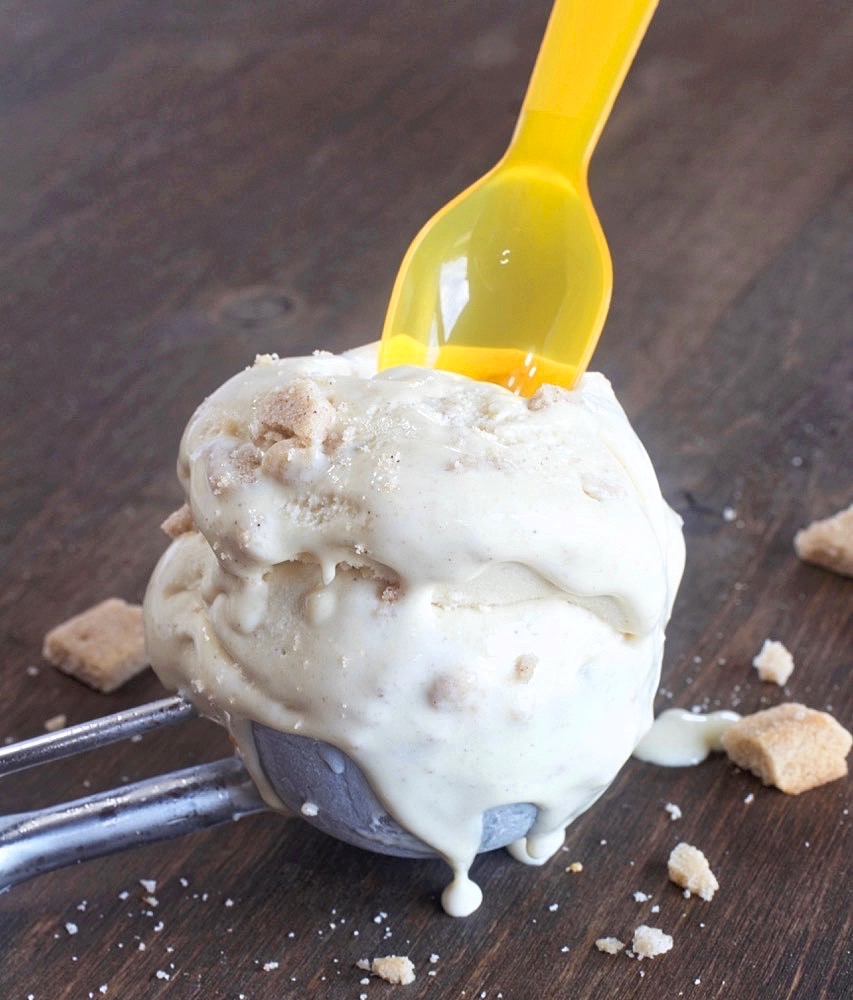 Oh, and I didn’t have to pay $4.50 for a scoop of this deliciously creamy ice cream either! 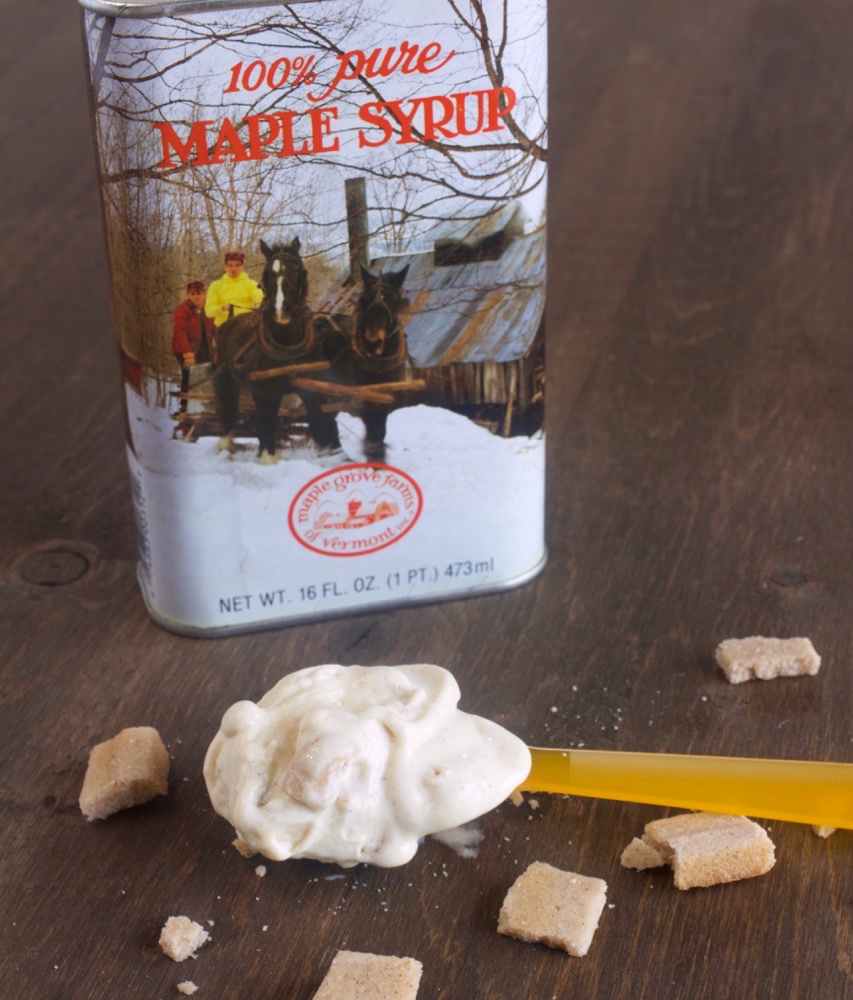 From My Country Table to yours… Maple Cinnamon Crunch Ice Cream!

This Maple Cinnamon Crunch Ice Cream is made with pure maple syrup and fresh cream, and it’s loaded with bits of homemade crunchy cinnamon shortbread cookies.  It takes no time to make and It’s absolutely creamy and delicious!!

FOR THE ICE CREAM

Preheat oven to 350 degrees.  Lightly grease a 9 x 13 baking sheet and set aside.

FOR THE ICE CREAM

The wafer cookie can be baked 2 to 3 days prior to making the ice cream.

Not all grade A maple syrups are the same.  I tested two organic maple syrups and found one to be far more superior than the other brand.  The winner was Kirkland brand syrup, that I purchased at my local Costco store.  It was excellent! 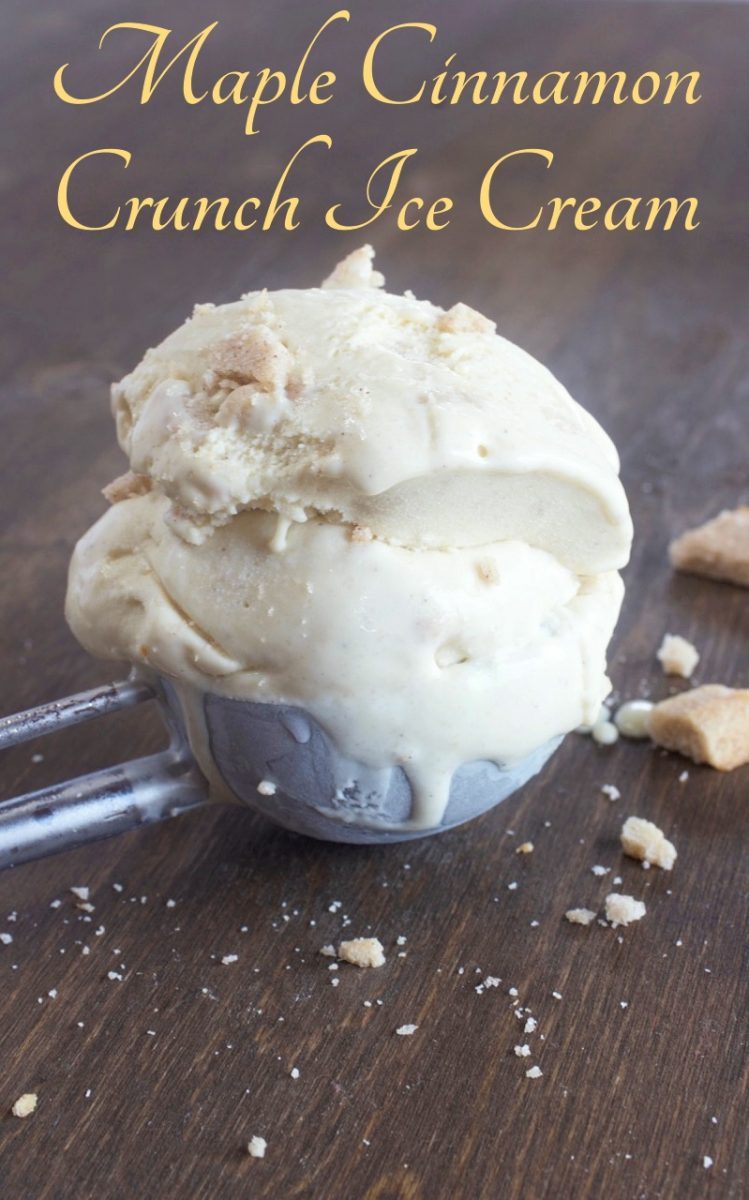 There may be affiliate links in this post. We are a participant in the Amazon Services LLC Associates Program, an affiliate advertising program designed to provide a means for us to earn fees by linking to Amazon.com and affiliated sites.
Desserts Ice Cream & Frozen Desserts Recipes

END_OF_DOCUMENT_TOKEN_TO_BE_REPLACED
©2022 My Country Table. All Rights Reserved. Design by Purr.