These homemade Apple Dumplings are an old-fashioned favorite.  They get stuffed with butter, sprinkled with cinnamon and sugar and wrapped in soft pie dough.  Then they get bathed in a cinnamony syrup and baked until the apples are tender and so aromatic that you won’t be able to wait to eat one! 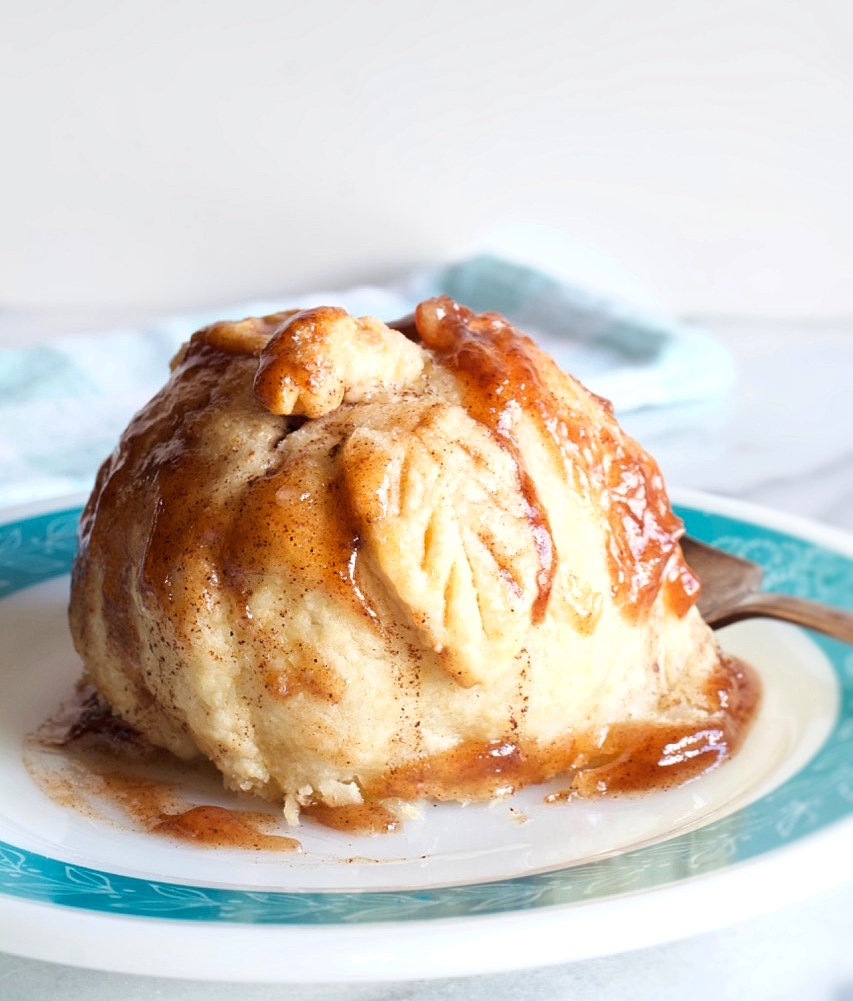 I fondly remember when my mother used to make these homemade Apple Dumplings.  She used to mix vanilla ice cream with some half & half to pour over the warm dumplings.  I always waited to see if someone didn’t want theirs, but I never got that lucky.  They disappeared before they had time to reach room temperature.  When I bake them, the aroma takes me back to my childhood all over again.

If you love Apple Pie, you’ll love these Homemade Apple Dumplings, and if you can make apple pie you can make apple dumplings.  Yes, they do require a few more minutes to prep than making apple pie,  but they’re worth it, especially if you’re serving them to guests.  They will be so impressed when you serve them their own special apple dumpling with a scoop of vanilla ice cream or their favorite topping.

Don’t worry!!  I’m going to walk you through each step of making these delicious apple dumplings, so you don’t have to feel intimidated by making them.

Let’s start with the sauce… 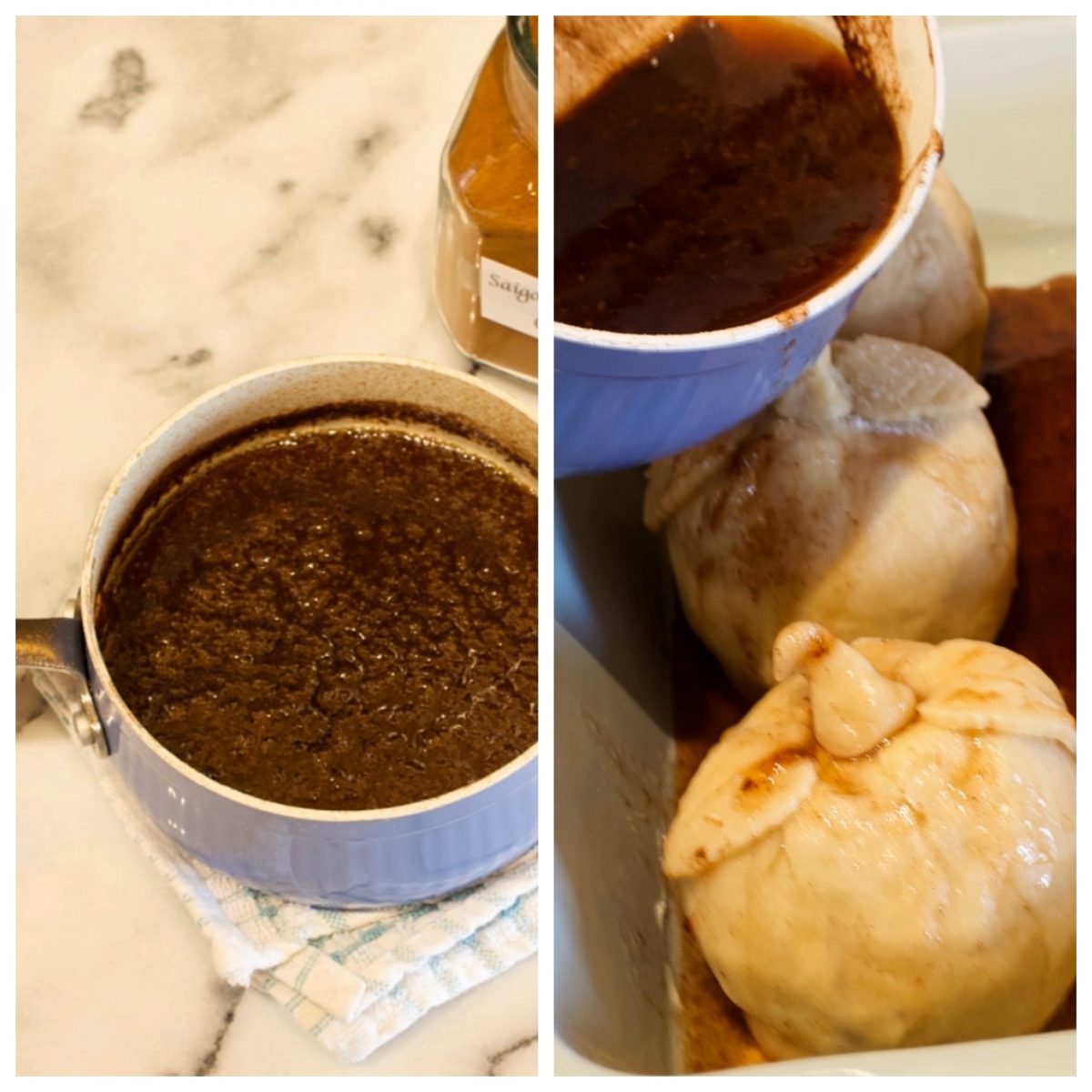 The sauce gets made first.  It’s made of water, sugar, cinnamon, butter, and cornstarch.   All you do is bring it to a boil over medium heat and let it simmer for 3 to 4 minutes and remove it from the heat.  Allow the sauce to cool while you’re making the dough and prepping the apples.  Once you’ve placed the apples in a baking dish, you’ll pour the sauce over them.  Once they are baked, you’ll spoon the sauce back over them before serving.

You’ll make the pie dough next… 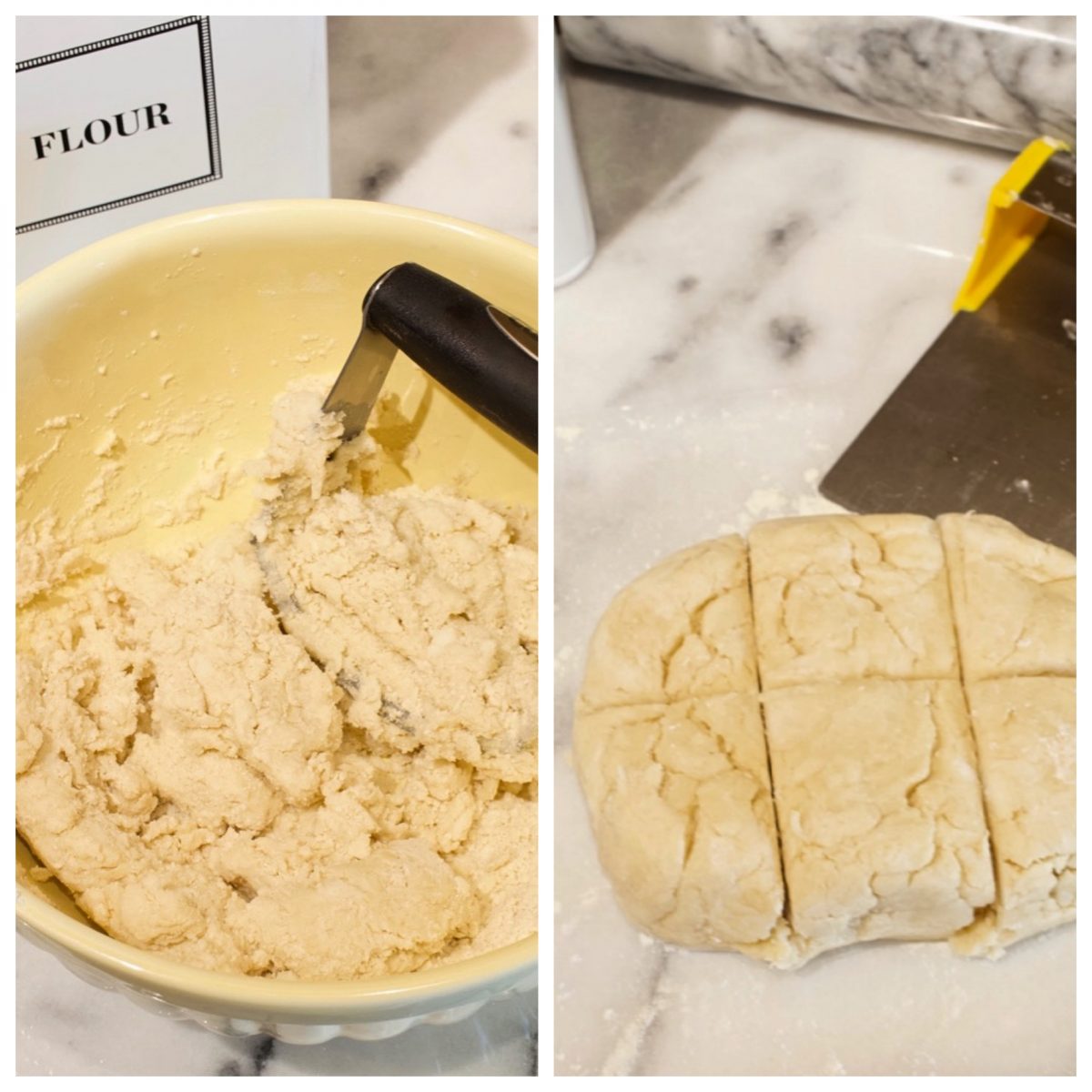 The pie dough is made with flour, baking powder, salt, solid shortening, and cold milk.  It gets mixed together and refrigerated while you’re prepping the apples.  Then it gets divided into 6 equal pieces for the 6 apples.  You can also use store-bought pie dough if you prefer.  It needs to be enough for a double-crust pie. 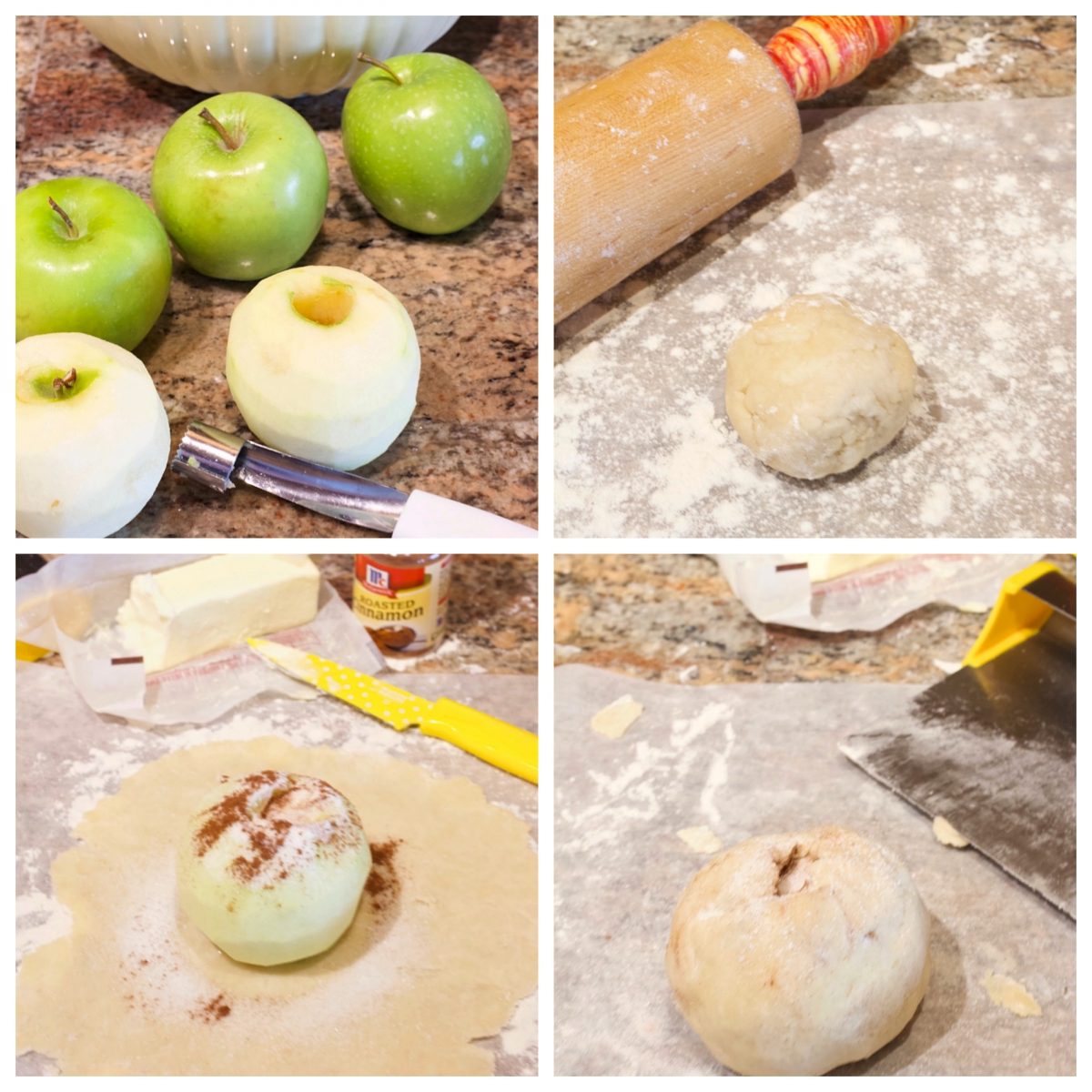 You’ll start by coring each apple.  It’s important to use small apples, not large.  You can place the apples in a bowl of ice water while prepping them, to keep them from turning brown, if you prefer.  It’s not really necessary since you’re baking the apples, but if you do place them in ice water, make sure you pat them dry before placing them on the pie dough.

Place an apple in the center of the piece of pie dough.  Stuff at least 1 teaspoon of butter into the hole of the apple, more if you can.  The more the better!  Sprinkle the apple generously with sugar and cinnamon.  Don’t measure it, just do it.  The more cinnamon, the better, I say!!!

The leaves and stems… 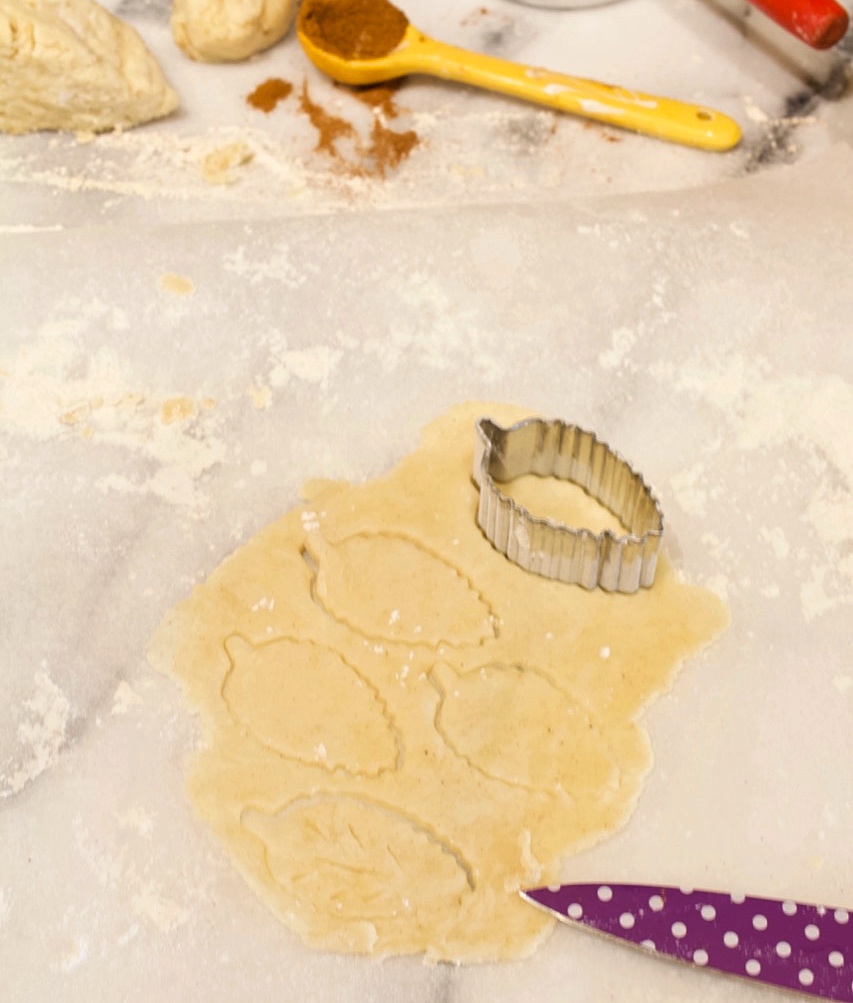 I used the dough scraps to cut out leaves, using a miniature leaf cookie cutter.  Then used a knife to make tiny veins on the leaves.  Once I cut out the leaves, I formed that leftover dough into stems.  Sometimes I run out and can’t make enough leaves and stems for all of the apples.  Again, this goes back to making sure you don’t have the dough too thick around each apple. 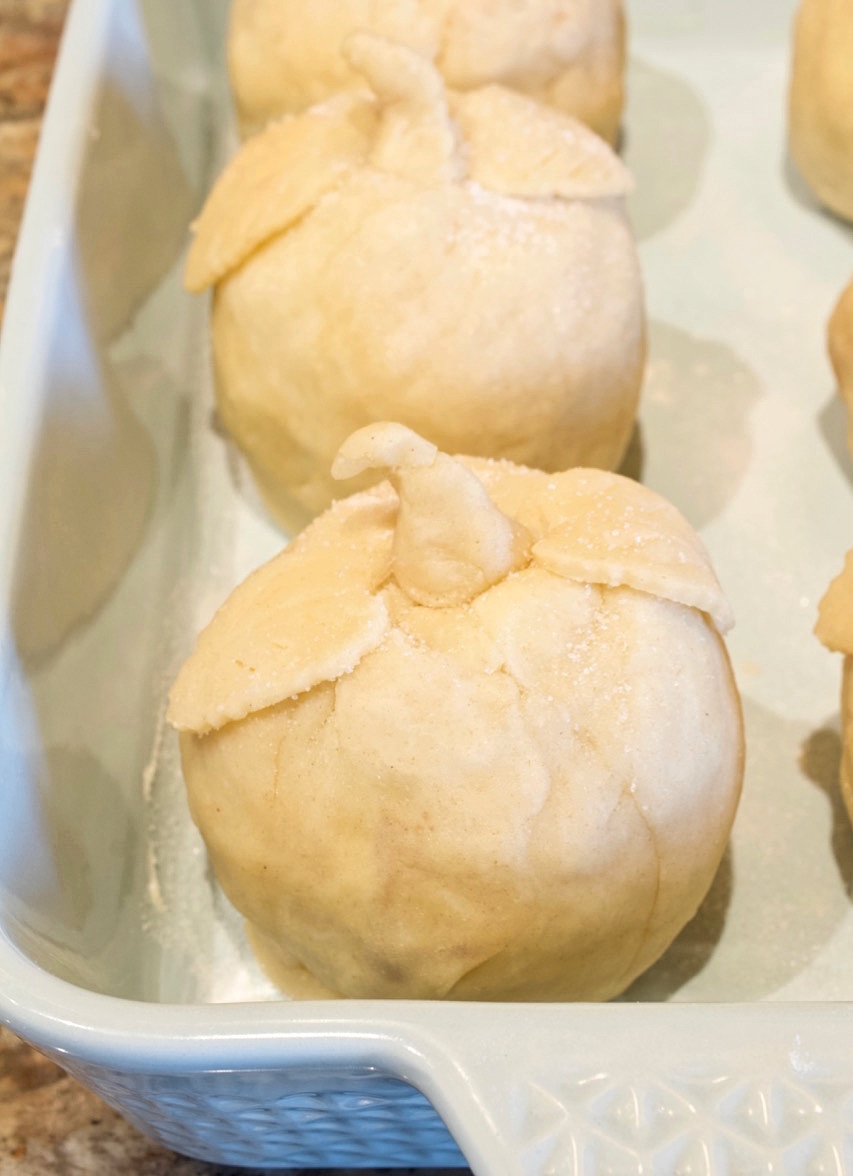 I pressed one leaf on each side of an apple, pressing down lightly on the stem of each leaf to adhere it to the dough on the apple.  Then I formed a stem and pressed it into the center.  I sprinkled a little more sugar on the apples, but you really don’t have too.  I poured the sauce over them and baked them. 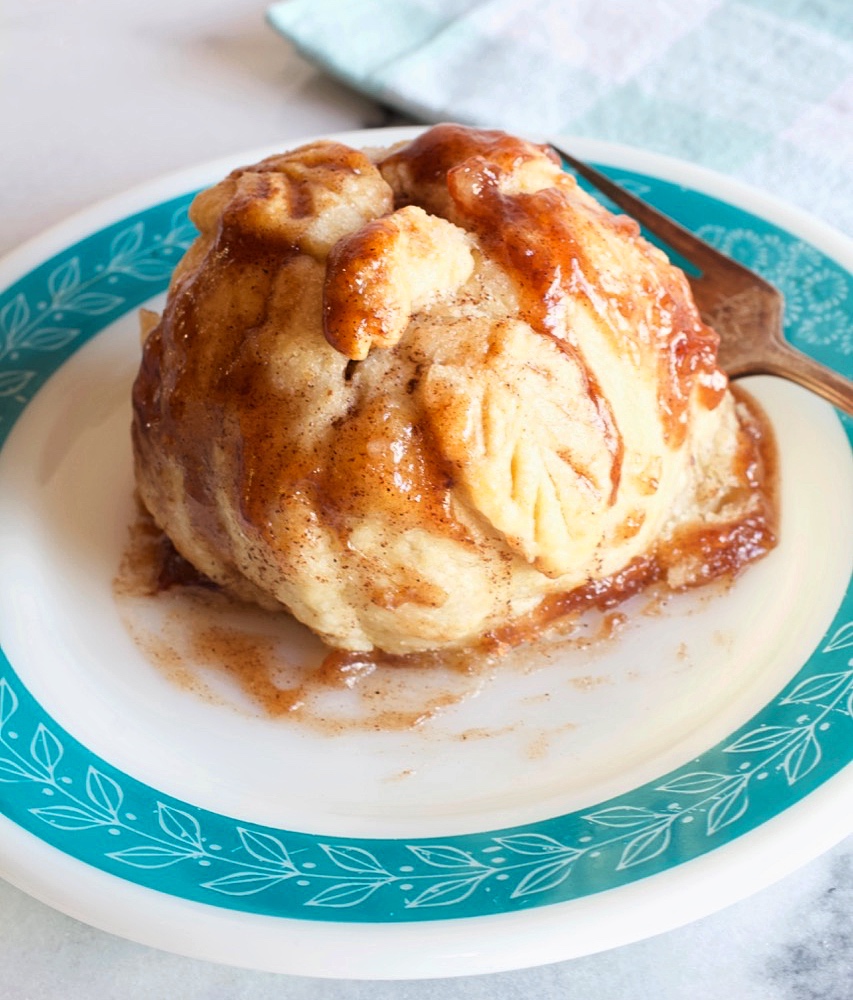 If you love Apple desserts, check out my recipe for Country Apple Pie.

These Homemade Apple Dumplings will take you back in time.  The apples are cored and filled with a tiny bit of butter, sprinkled with cinnamon and sugar and wrapped in a soft pastry dough.  They get finished with a cinnamon sauce that gets poured over them before baking them to a golden brown.  They are a perfect dessert to welcome Fall or for any time of year!