If you want a dinner roll that is the perfect roll for any meal, make these tender melt-in-your-mouth Honey Rolls with Cinnamon Honey Butter!  These rolls have a perfect touch of honey in them and the Cinnamon Honey Butter takes 5 minutes to make and it’s over-the-top delicious on these soft honey rolls!! 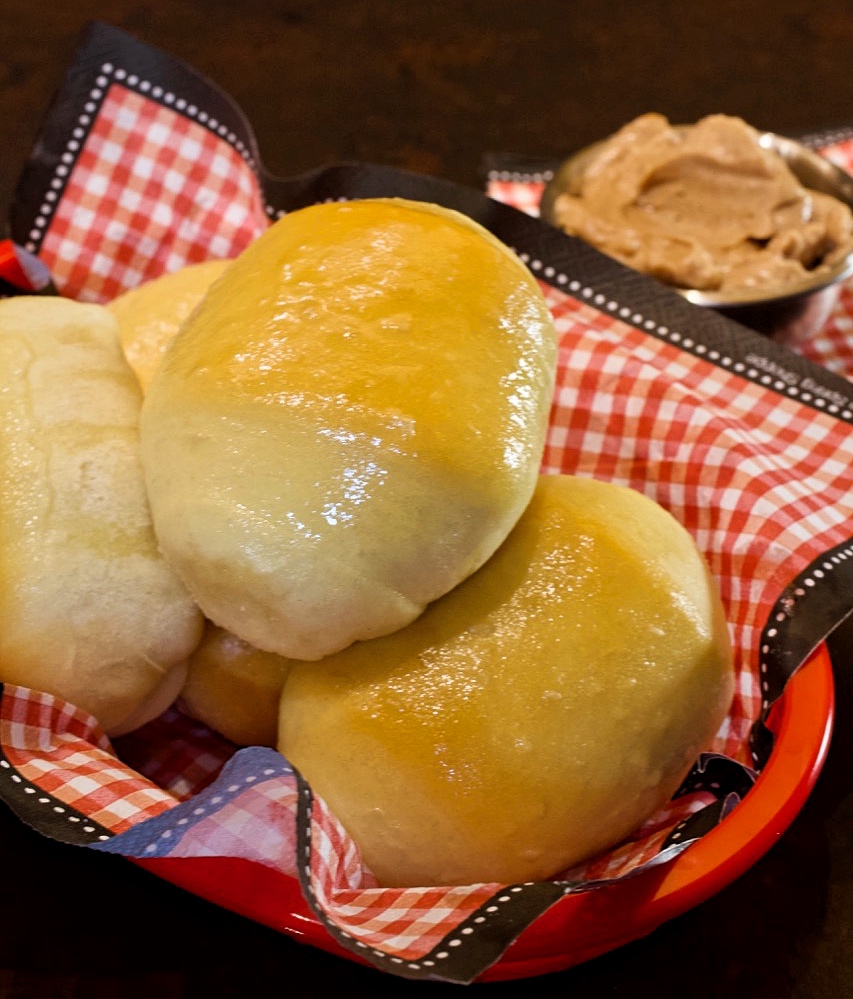 Most dinner roll recipes start out with the same basic ingredients…yeast, flour, salt, sugar, water, butter, and milk.  Once you have a basic recipe, you will realize just how versatile it is.  Change it up to satisfy your specific craving or need for a specific meal.  I am a huge fan of the Honey rolls with Cinnamon Honey butter served at our local restaurant, Texas Roadhouse, and wanted to make my own version of the rolls   For this recipe, I used one of my favorite dinner roll recipes from my old Fleishmann’s yeast cookbook and replaced the sugar with honey along with a couple of other tweaks..  Then I whipped up the all too easy 5- minute Cinnamon Honey butter to serve with them. 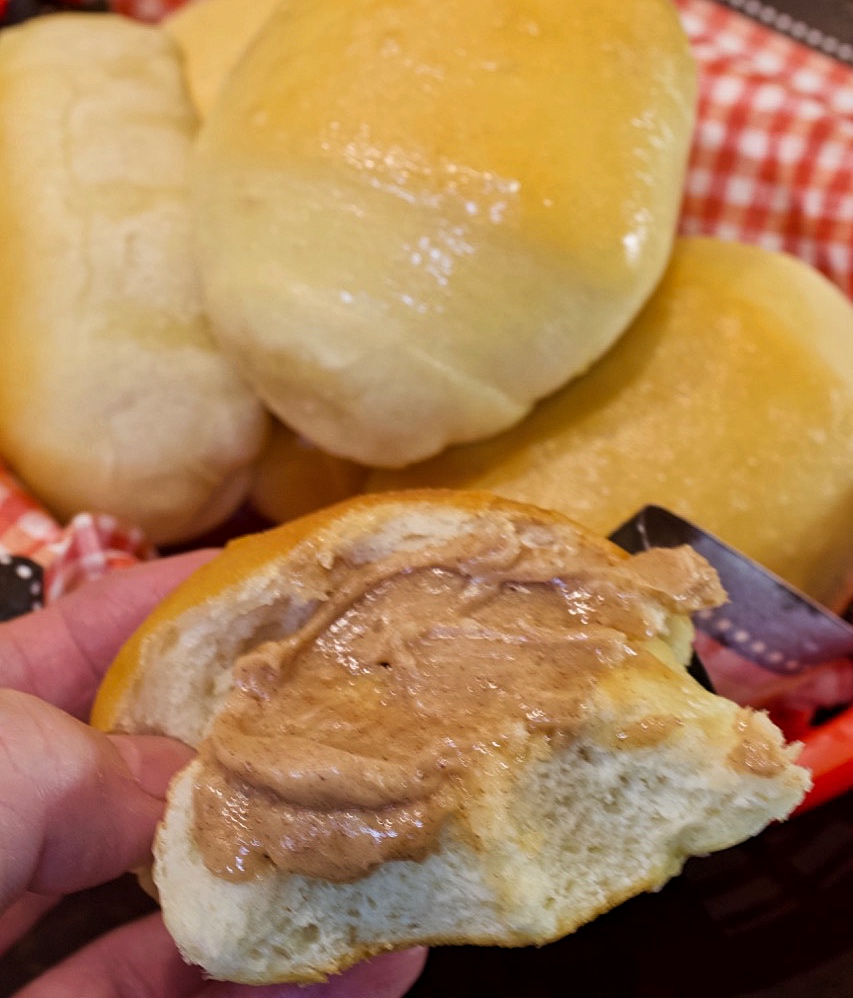 Many people feel very intimidated when it comes to the idea of making anything with yeast, but honestly, it’s not hard at all.  Once you experiment with yeast you’ll realize it’s not that hard and you’ll be doing it again.  You’ll also realize how you can take one yeast bread recipe and make it into so many different varieties of bread.

I usually don’t dive so in-depth with most recipes, but I do with some yeast recipes for the benefit of those who haven’t baked with yeast.  Therefore, I’m going to illustrate each step of how I made these rolls.  Feel free to skip over them and go straight to the recipe if you prefer. 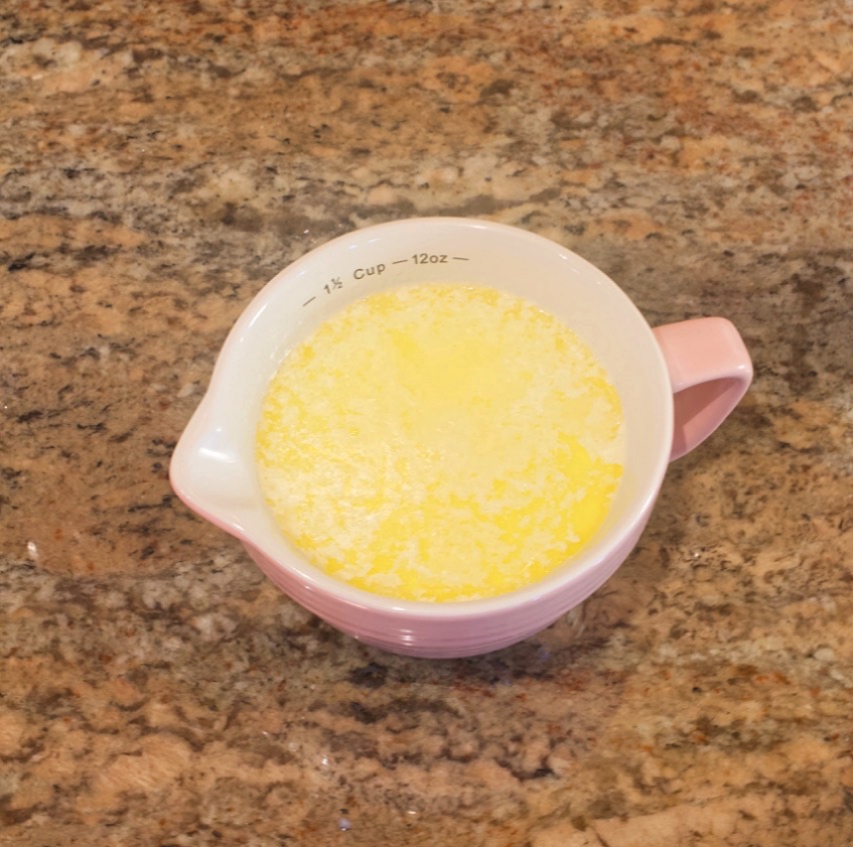 I heated some milk and softened butter in the microwave just until hot enough to melt the butter.  I set it aside to cool while making the yeast mixture. 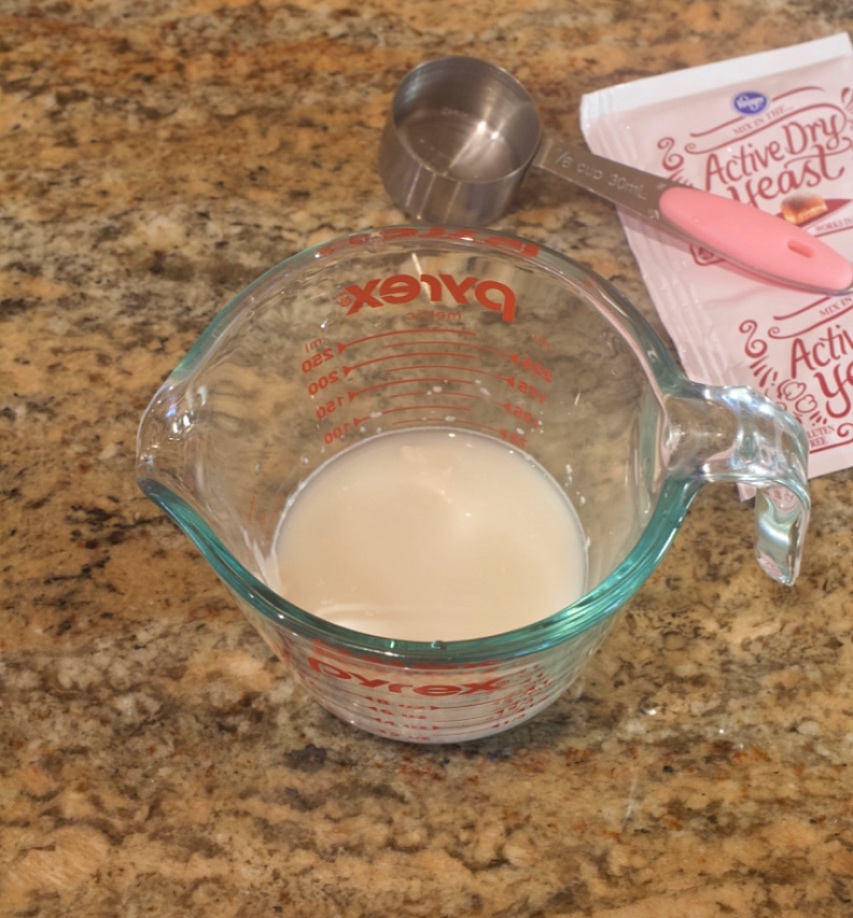 Blooming or proofing the yeast.  Today, a lot of bakers skip this step due to modern yeast packaging techniques, but I still like to do it if my yeast has been on the shelf for a while and it’s a very simple step.   I added a packet of instant yeast and 1 teaspoon of honey to a small amount of very warm water.  The best temperature is between 105 and 110 degrees.  Very warm but not hot to the touch.  If the water is too hot it will kill the yeast.  Honey or sugar helps jumpstart the yeast by feeding it.  The yeast eats the sugar or honey and produces carbon dioxide which makes the dough rise.  I added the yeast and honey to very warm water and allowed it to sit for about 5 minutes.  This is plenty of time to test it.  I will start to foam up and you’ll know it is active and alive. 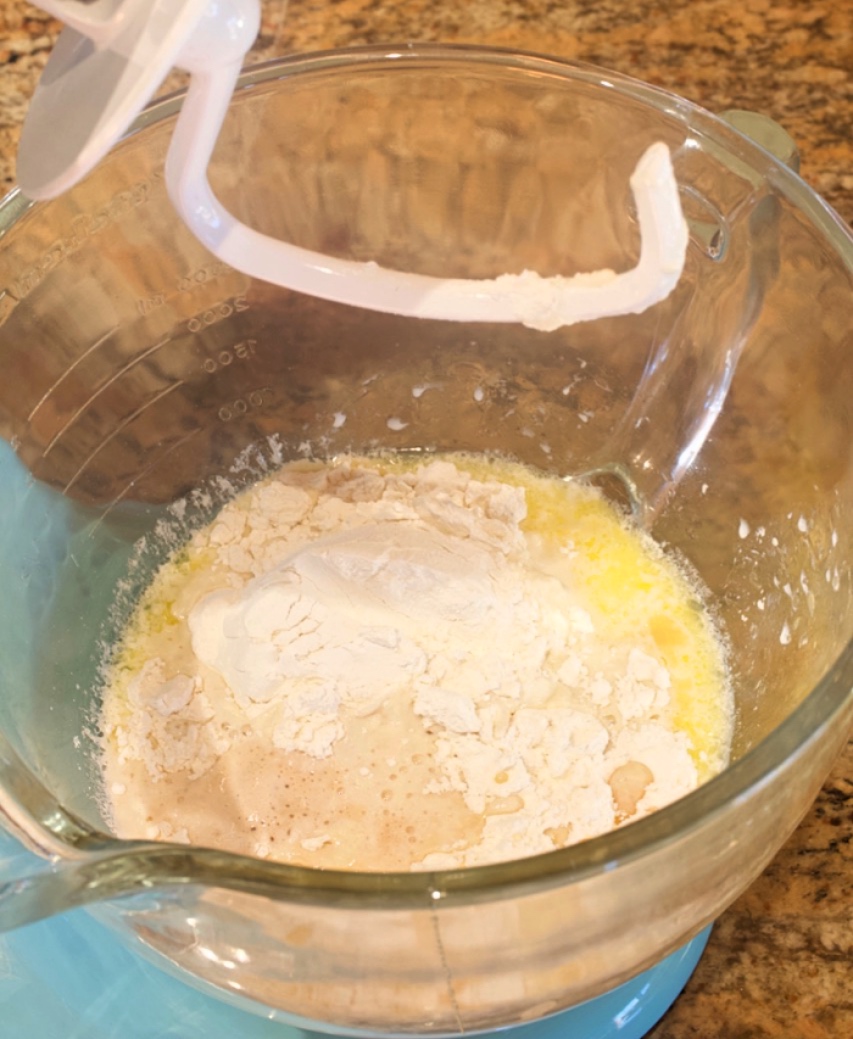 Once I allowed the yeast to proof, I added the yeast, milk/butter, salt, 1 egg, and 1 cup of flour to the bowl of a stand mixer.  I mixed the mixture until well combined.  You can start with the paddle attachment, but you need to switch to the dough hook once you add more flour. 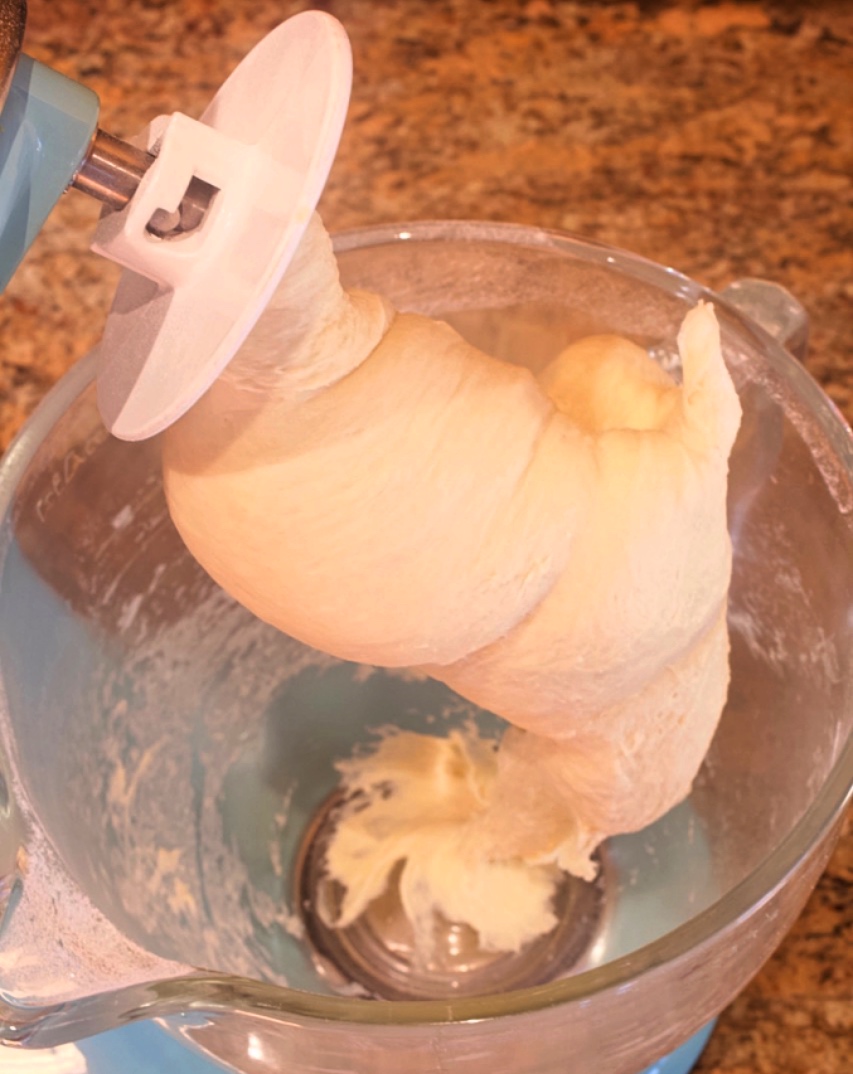 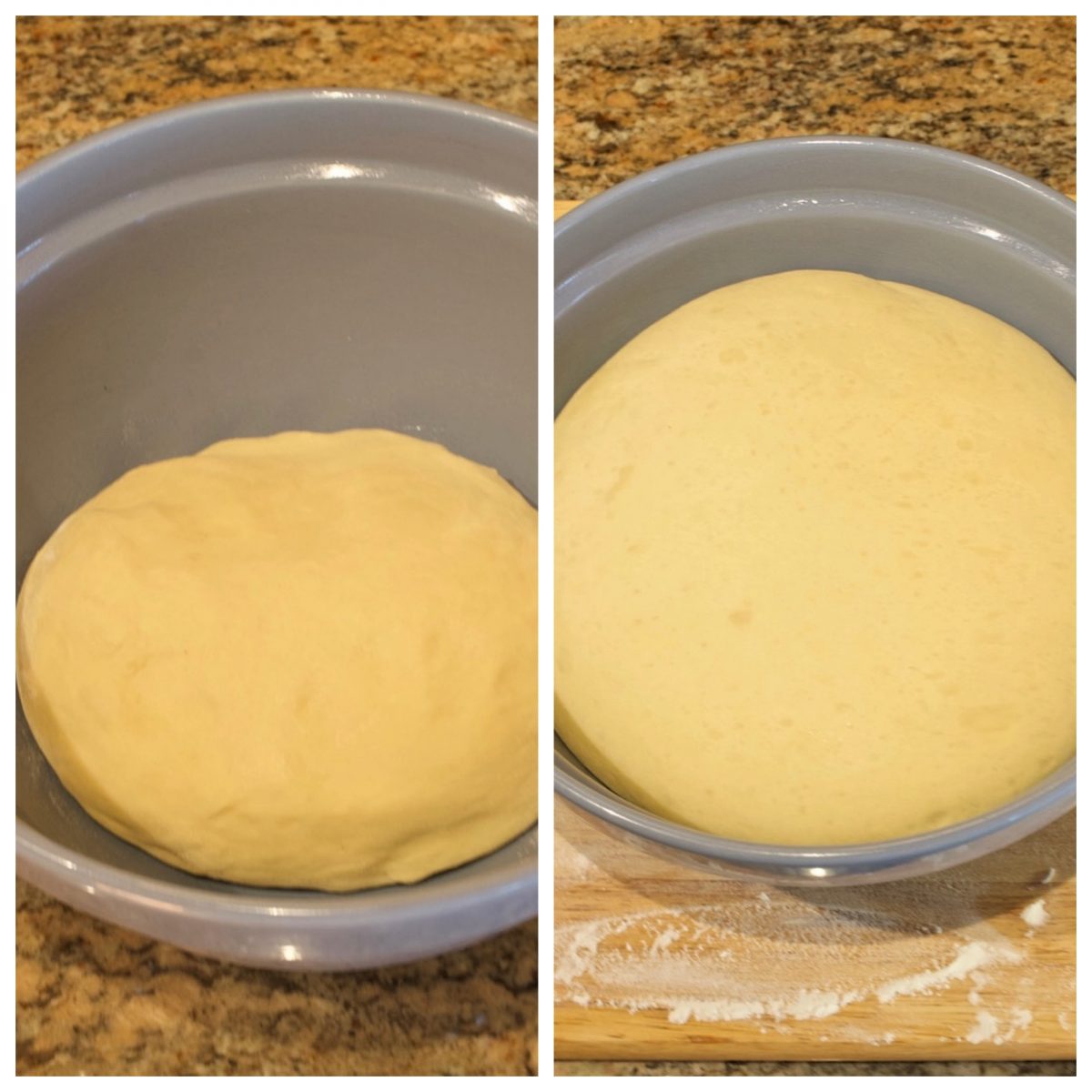 First rise…  I transferred the dough to a lightly floured work surface.  I formed it into a round ball.  Then I placed it in a greased bowl, turning it once to grease both sides.  I covered it with a towel and placed it in a warm oven until the dough was almost doubled in size. 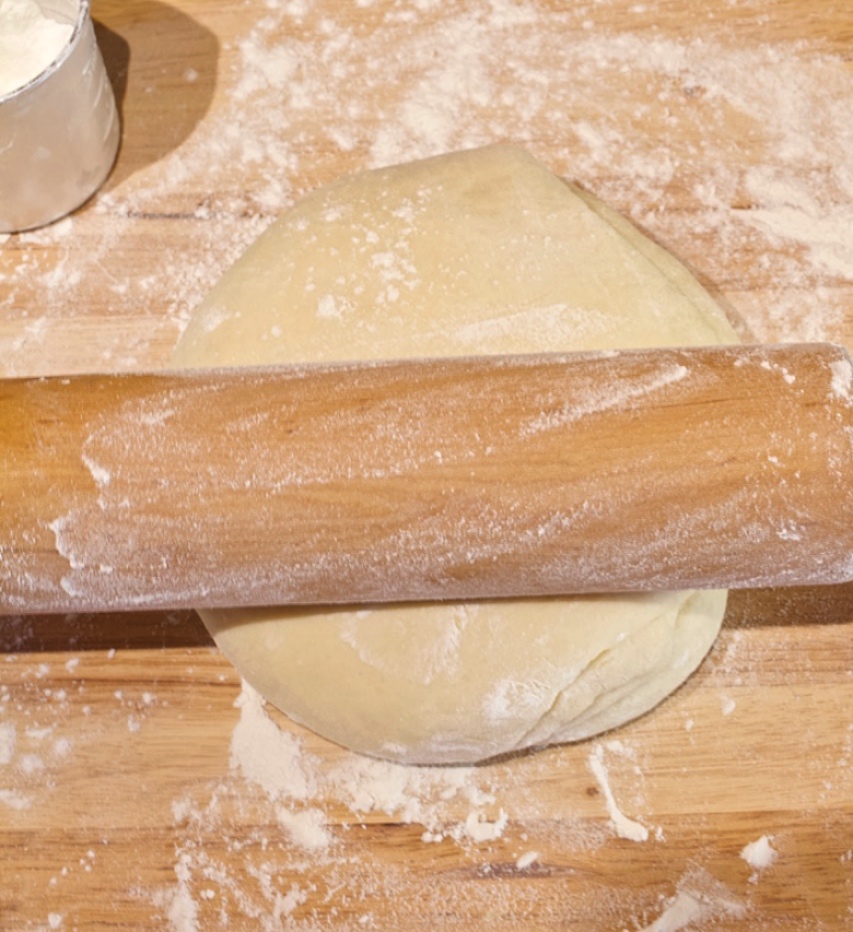 I placed the dough on a well-floured surface and rolled it out to about 1/2 inch in thickness. 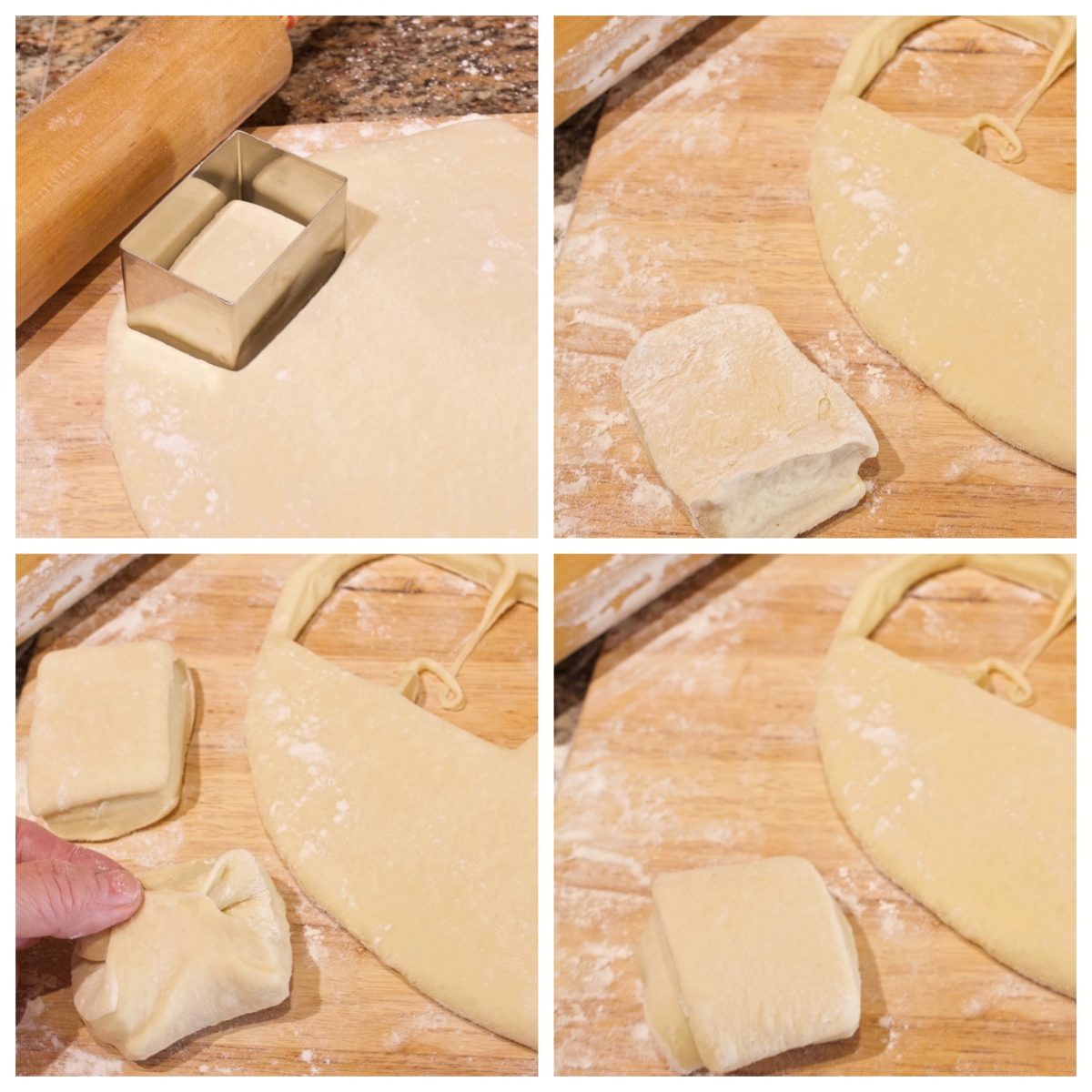 I used a 2 x 3-inch rectangle cookie cutter to cut the dough.  You can also use a bench scraper, pizza cutter, etc…  Once I cut the dough into rectangles, I could’ve placed them on a cookie sheet and baked them in that form, and you can too.  However, for a rounded top, I grabbed the edge of the dough on each short end and brought them together on the bottom and pinched the two edges together.

I placed the rolls on a cookie sheet, covered them with a towel and allowed them to rise for about 15 minutes while preheating my oven.  Then I baked them and brushed the tops with melted butter. 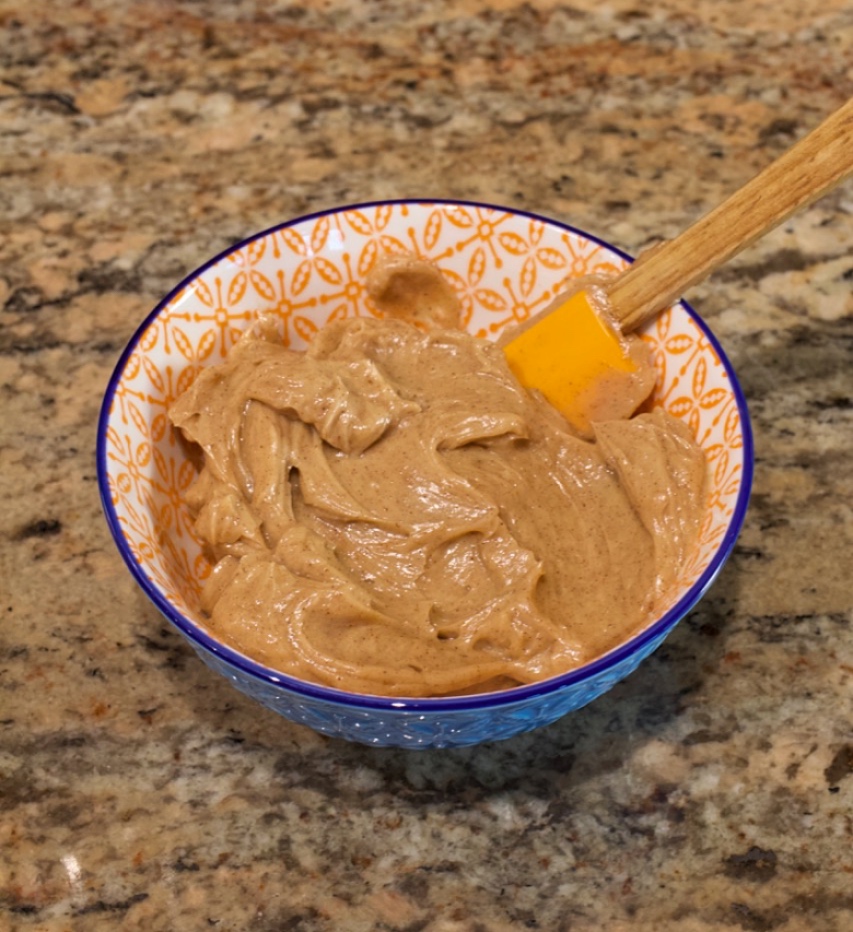 While the rolls were baking, I whipped up the Cinnamon Honey butter which took 5 minutes.  A combo of butter, honey, cinnamon, and a bit of powdered sugar. 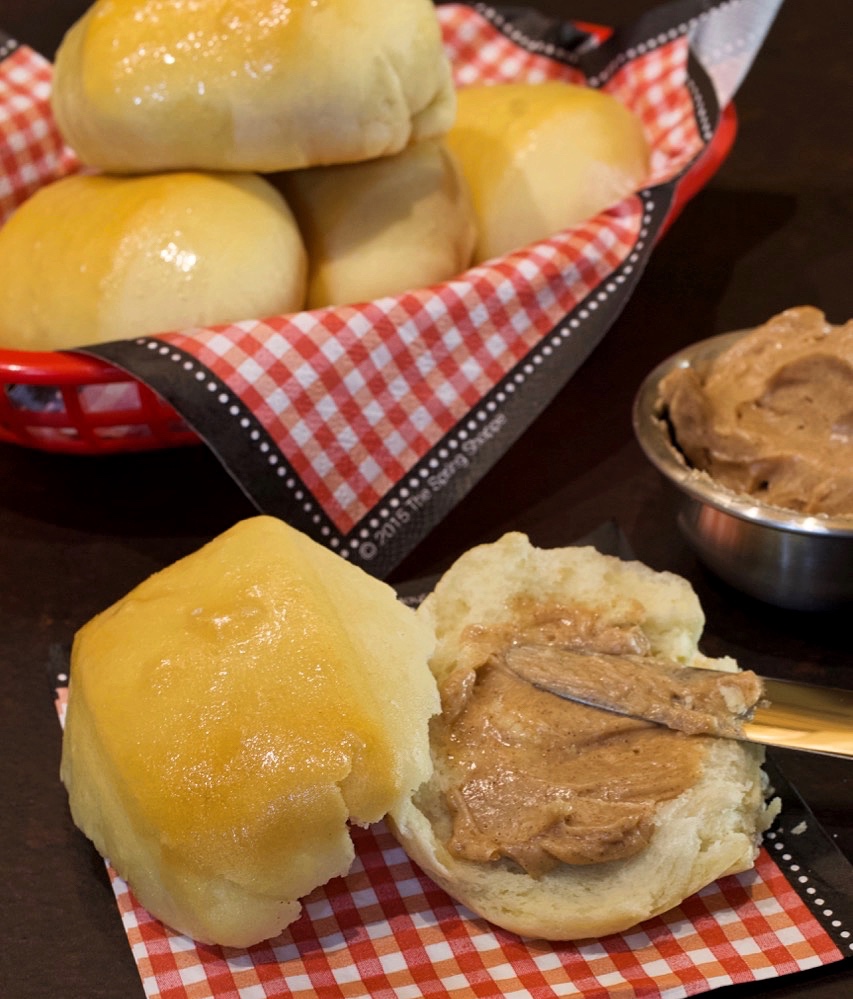 Don’t feel intimidated by my illustrated steps.  They’re there to help, not intimidate!!  There are a few steps but they really are easy!!!  Make these delicious Honey Rolls with Cinnamon Honey Butter.  You’ll be SO glad you did.

These tender rolls have the perfect touch of honey in them and the cinnamon honey butter takes 5 minutes to make.  The two greatly complement each other and you’ll be wishing you made a double batch!

Preheat oven to 160 degrees and turn off.

There may be affiliate links in this post. We are a participant in the Amazon Services LLC Associates Program, an affiliate advertising program designed to provide a means for us to earn fees by linking to Amazon.com and affiliated sites.
Breads Christmas Holiday Recipes Thanksgiving

END_OF_DOCUMENT_TOKEN_TO_BE_REPLACED
©2023 My Country Table. All Rights Reserved. Design by Purr.