END_OF_DOCUMENT_TOKEN_TO_BE_REPLACED

In case you’ve never heard of Modjeskas allow me to tell you about this wonderful candy.  This candy starts with the most deliciously rich, buttery homemade caramel.  Once the caramel is made, it’s cut into strips and wrapped around marshmallows.  This is the most delicious candy ever! 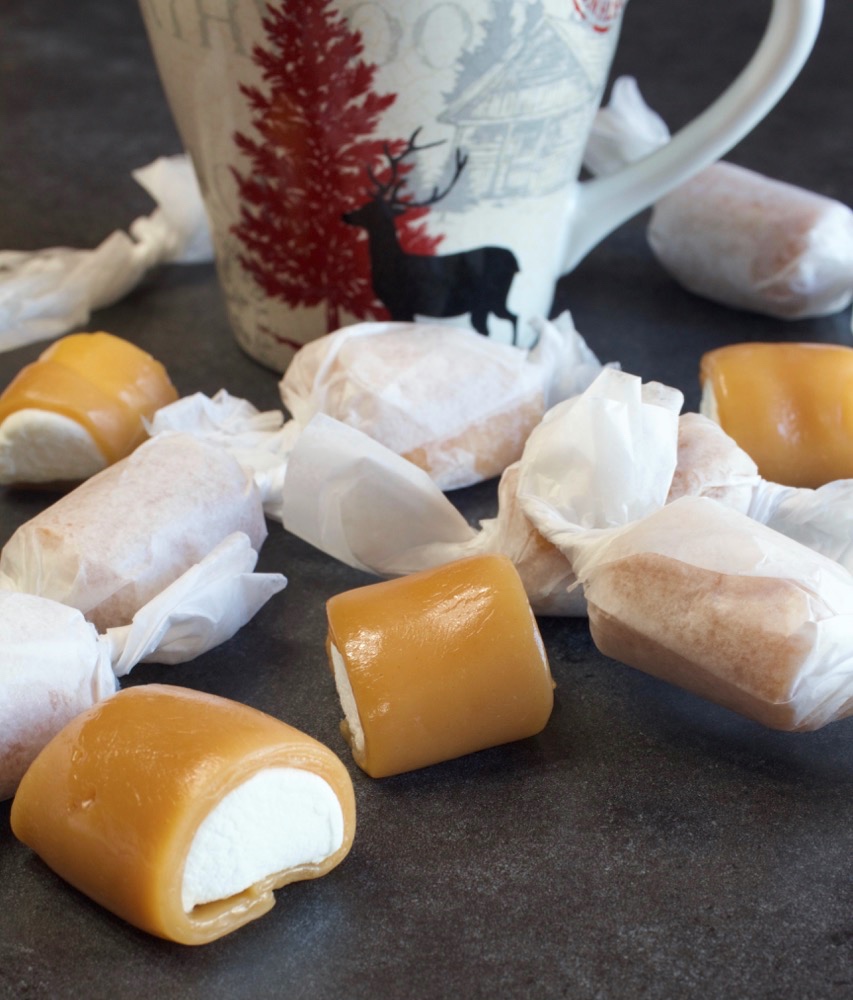 If you love marshmallows and caramel, you are gonna love, I mean LOVE this recipe.  What in the world is a Modjeska? Well, you’re about to find out.  A Modjeska is a marshmallow that is covered with a buttery delicious homemade caramel candy.  It’s that simple.

This recipe originated years ago in my own birthplace, Kentucky.  Many years ago, we’re talking 1883, a Kentucky candy maker, Anton Busath was inspired to make this candy.  Also in 1883, a well-known European actress, Helen Modjeska, made her American debut in Kentucky.  Anton Busath was so touched by her performance in “A Doll’s House”, that he asked her permission to name his newest confection after her.  That, my friends, is how the Modjeska candy got its name.  Unfortunately, in 1947, the Busath candy company was destroyed in a fire.

Today, there are still a couple of candy companies in Kentucky, Bauers Candy, and Muth Candies that make a version of the Modjeska, and I see the candy in some Cracker Barrel stores, but nothing compares to the homemade version.

The first time I was lucky enough to eat this candy I was 12 years old.  We had our church Christmas progaram, and my mother received a present from another Sunday school teacher.  When she brought it home and opened it, my eyes lit up.  A box full of these delightful looking little wrapped candies.  The rest is history!!

Decades later, my daughter Christin makes sure that a Christmas doesn’t go by without me making these, and I have to hide them from her and my husband every time I make them. 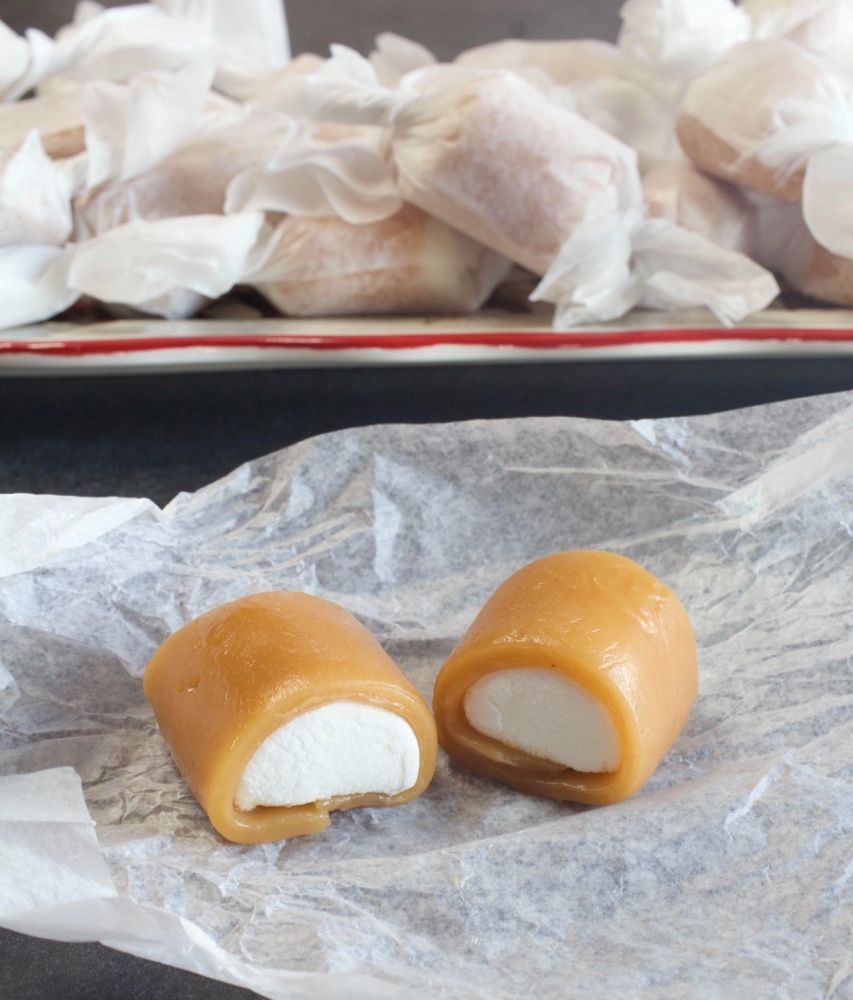 Prepping to make the candy:

You need to butter a marble slab or a heatproof counter top.  If using the marble slab, it doesn’t need to be cold.  I actually recommend it not being cold for this candy.  If you pour this candy on a cold surface, it will begin to get too cold around the edges before you can work with it.

Now, open up a bag of large marshmallows.  Using scissors, cut each marshmallow in half lengthwise, and throw them in a large bowl and set them aside for now.  Now, I almost forgot, but you also need to cut several squares of wax paper for wrapping the candy pieces.

Next, you want to use a nice big heavy pot.  Now place the sugar, syrup, butter, and one cup of the whipping cream in the pot.  Oh my goodness!  Butter and whipping cream…..this should tell you where we’re headed.

Now slowly add the second cup of cream, while making sure that you don’t let the mixture stop boiling. Continue to cook and stir slowly but constantly, until the mixture reaches 255 degrees on a candy thermometer, OR…

a hard ball when tested in cold water.  If you use a candy thermometer, see how to calibrate a candy  thermometer.  Okay, let me explain something here….a hardball is when you can drop a little bit of the mixture in cold water and then form it into a hard but pliable ball when you roll it between two fingers. Simply put…once the mixture has been cooled in the cold water, it should be the exact same consistency as it will be when you wrap it around a marshmallow.  If it doesn’t look like it is hard enough to keep its shape when you wrap it around a marshmallow, then it’s not ready yet.  When the caramel has cooked long enough, it will also be a nice caramel color, not too light.

Now pour the caramel onto a buttered marble slab or countertop.  Note:  If using a marble slab, the slab does not need to be chilled first.

Now, as soon as it cools enough that you can handle it in your hands, either tear off pieces with your hands or use a knife or sharp spatula to cut off small pieces.  You want the pieces to be just big enough to wrap around one of the marshmallow halves.  As you keep removing pieces of caramel, keep removing it from the outside edges as you go.  The edges get cold the quickest.

Allow the caramel wrapped marshmallows to totally cool before wrapping or they will stick to the wax paper.  Wrap each piece in a square of wax paper and twist the ends.  These don’t really have to be stored in an airtight container.  I toss them in a large bowl….then I hide the bowl.  Over the years, my daughter Christin has always found my hiding place….lol.  These are best when eaten within a couple of weeks.  After that point, the sugar tends to start breaking down in them.  Trust me….don’t worry…..they won’t last that long! 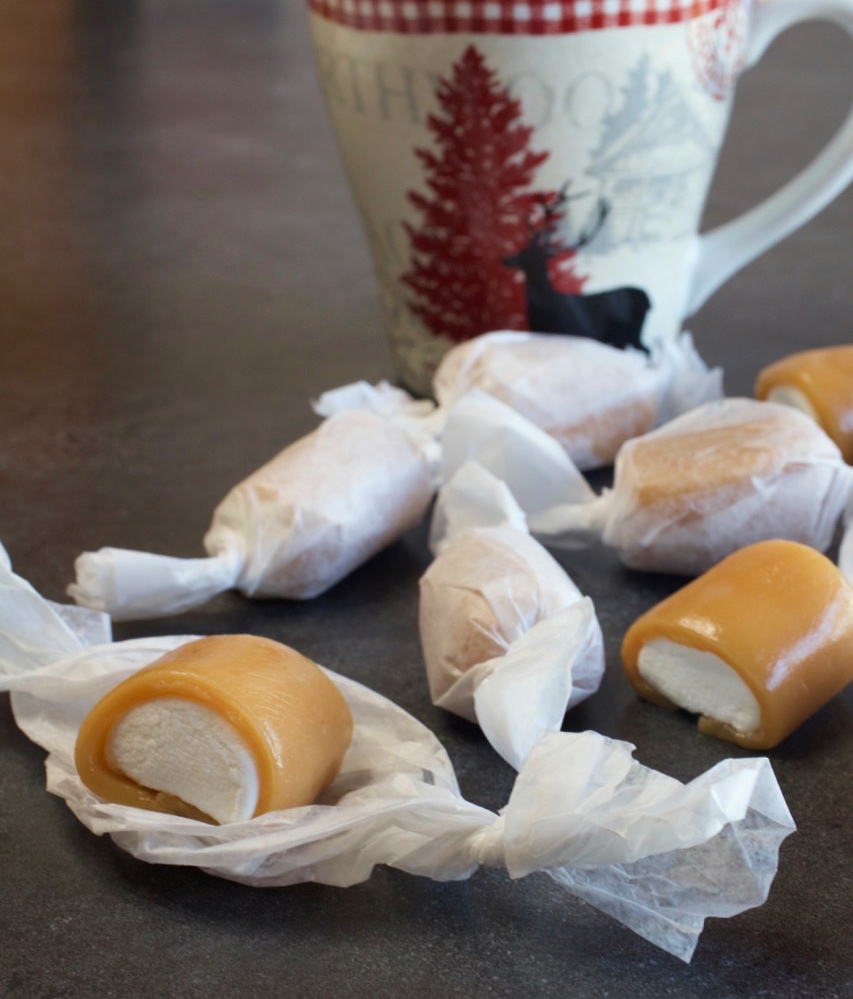 Try my “Caramel Pecan Log”  variation of this recipe.  One day I decided to just experiment with a batch of my Modjeska caramel, and here is what happened…I had a bunch of extra pecans in my pantry from Christmas baking, and I wondered….hmmm….wonder what the Modjeska caramel would taste like with pecans….that’s when the “Caramel Pecan Log”  was born.  Yum!!!  Homemade caramel and pecans together…..where have I been!!

All I did was line an 8 x 8 ” dish with foil.  Then I cooked up a batch of my Modjeska caramel.  I tossed in a cup of coarsely chopped pecans that I had lightly toasted for five minutes on a cookie sheet in the oven.  I mixed the caramel and nuts together real good, then poured the mixture into the prepared dish.  Once the mixture cooled, I lifted the caramel and foil out of the dish.

I cut the caramel into small squares…

Then I rolled each piece between the palms of my hands to form a log.  I wrapped each piece in a square of wax paper and twisted the ends.  Voila!!! 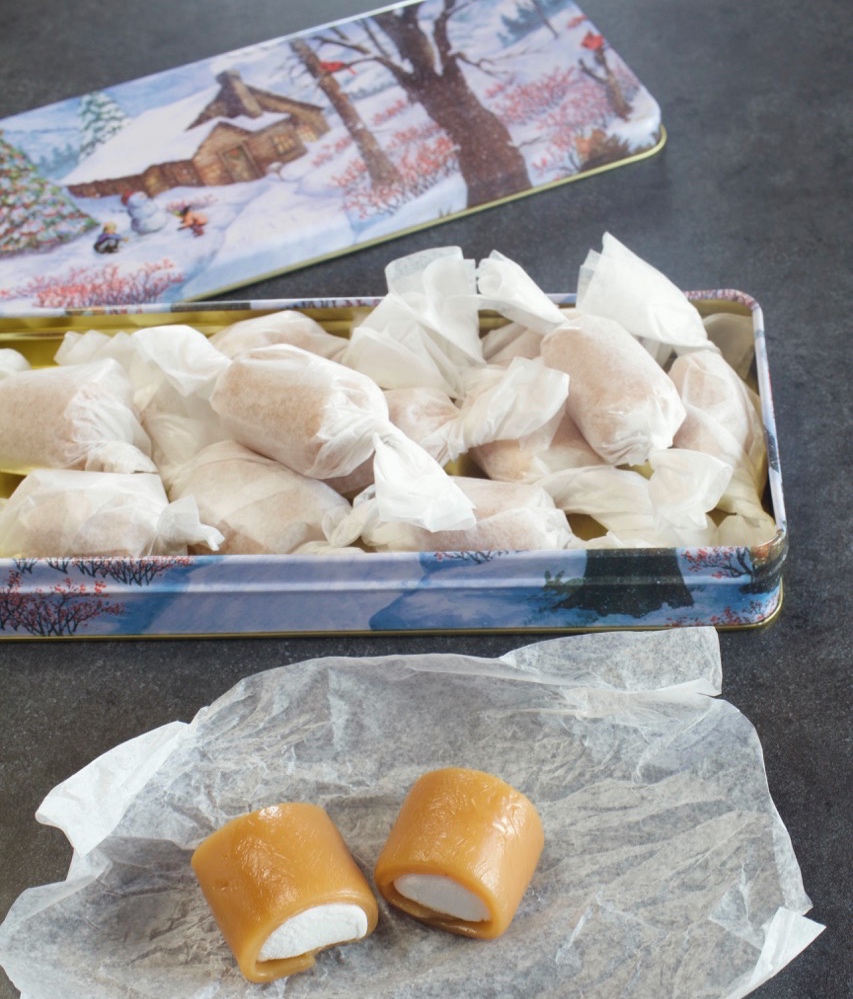 This delicious candy is made of rich, buttery, melt in your mouth bites of caramel bliss wrapped around marshmallows.  It’s absolutely divine!

There may be affiliate links in this post. We are a participant in the Amazon Services LLC Associates Program, an affiliate advertising program designed to provide a means for us to earn fees by linking to Amazon.com and affiliated sites.
Candy Christmas Desserts Holiday Recipes

« Previous PostChristmas Butter Cookies
Next Post » Table Talk – What is that nasty little white thing on my egg yolk?

END_OF_DOCUMENT_TOKEN_TO_BE_REPLACED
©2022 My Country Table. All Rights Reserved. Design by Purr.