The only hard thing about making these Glazed Yeast Donuts is the waiting.  The dough goes through two rises, but the steps are super easy.  They are soft and delicious with a drizzle of sugar glaze.  The whole family will love them!! 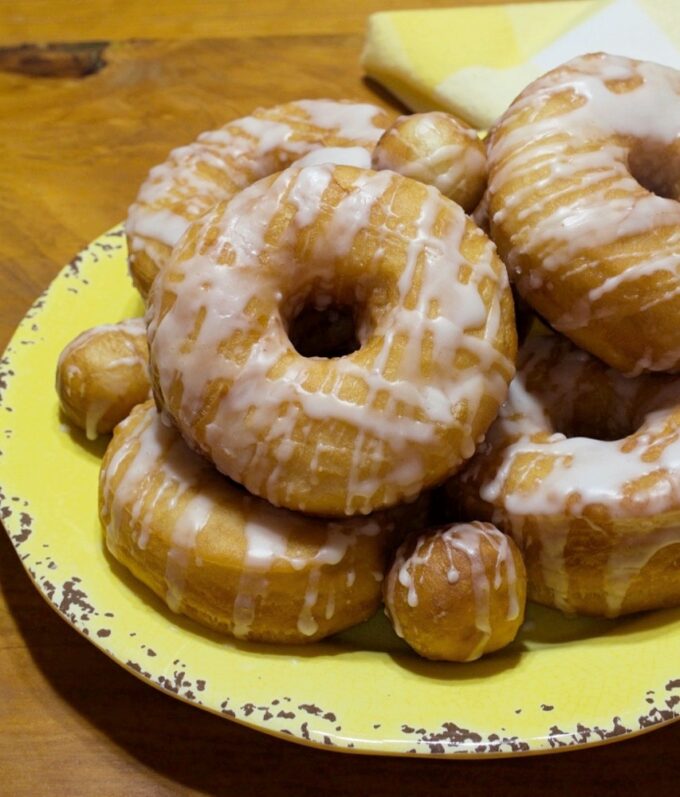 You might think homemade yeast donuts are hard to make, but they really aren’t.  The steps are easy and the only thing you need is some time and patience.  The dough goes through 2 rises, and that’s the secret to light and airy donuts.  It’s so worth the wait.  You just have to trust me on this.

You might notice on some recipes, that I don’t illustrate each and every step of the recipe with photos.  However, when it comes to recipes with yeast, such as this one, or any recipe that has several steps, I try to post a picture for each step.  Although this recipe is easy, some of you might feel intimidated by the thought of using yeast if you’ve never before used it, so I’ll walk you through the steps here. 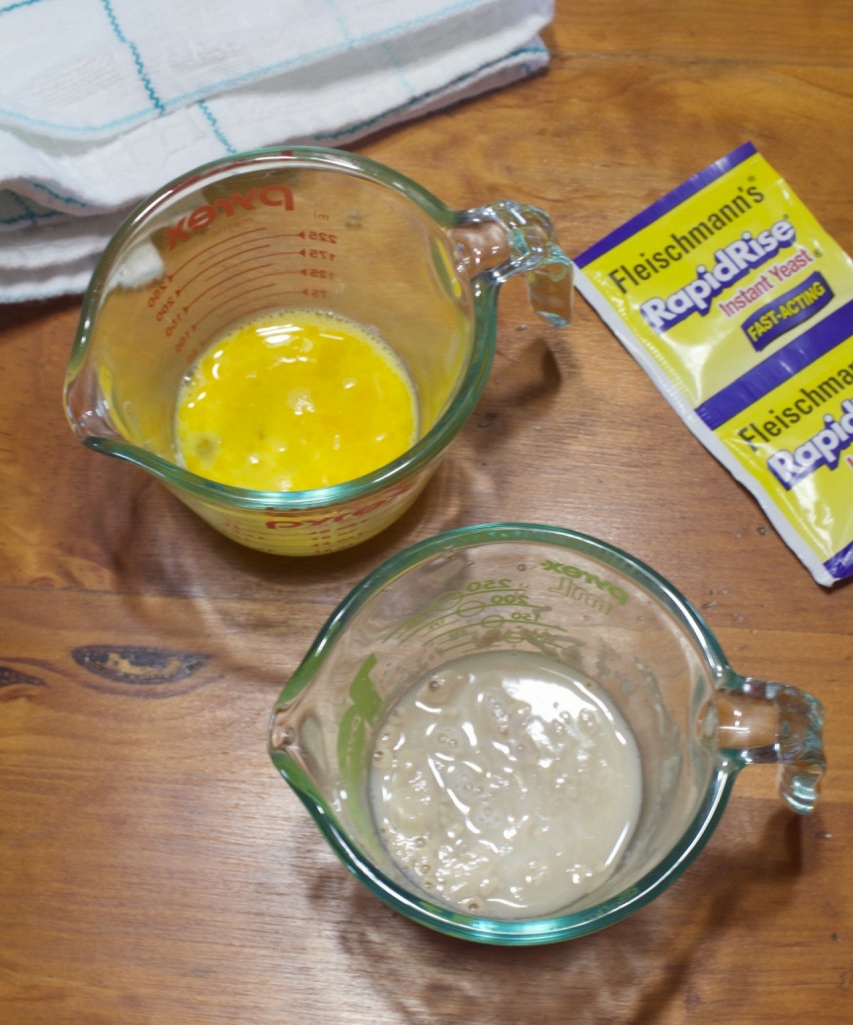 What role does yeast play in making bread dough?

Yeast is the secret to making the dough rise.  Yeast gets added to warm water and the water dissolves the coating on the yeast granules, exposing the active yeast that’s inside.  The yeast interacts with the sugar and releases carbon dioxide.  This causes the foam and bubbles to form on top of the yeast mixture.  This is proof that the yeast is alive, also known as proving.  Anytime you’re using yeast in a recipe, it’s best to test the yeast to make sure it’s still alive before adding it to your recipe.  If it’s no longer alive, your bread won’t rise.

I prefer to use ‘fast-acting” or “rapid-rise” yeast in any bread dough that I make.  The fermentation process starts with the yeast.  I added the dry yeast to warm water and allowed it to rest for 5 minutes until the yeast began to form bubbles on the surface.  This recipe calls for one beaten egg.  I added the egg and the wet yeast mixture to other ingredients in the steps below.

Here’s what I did to make the dough… 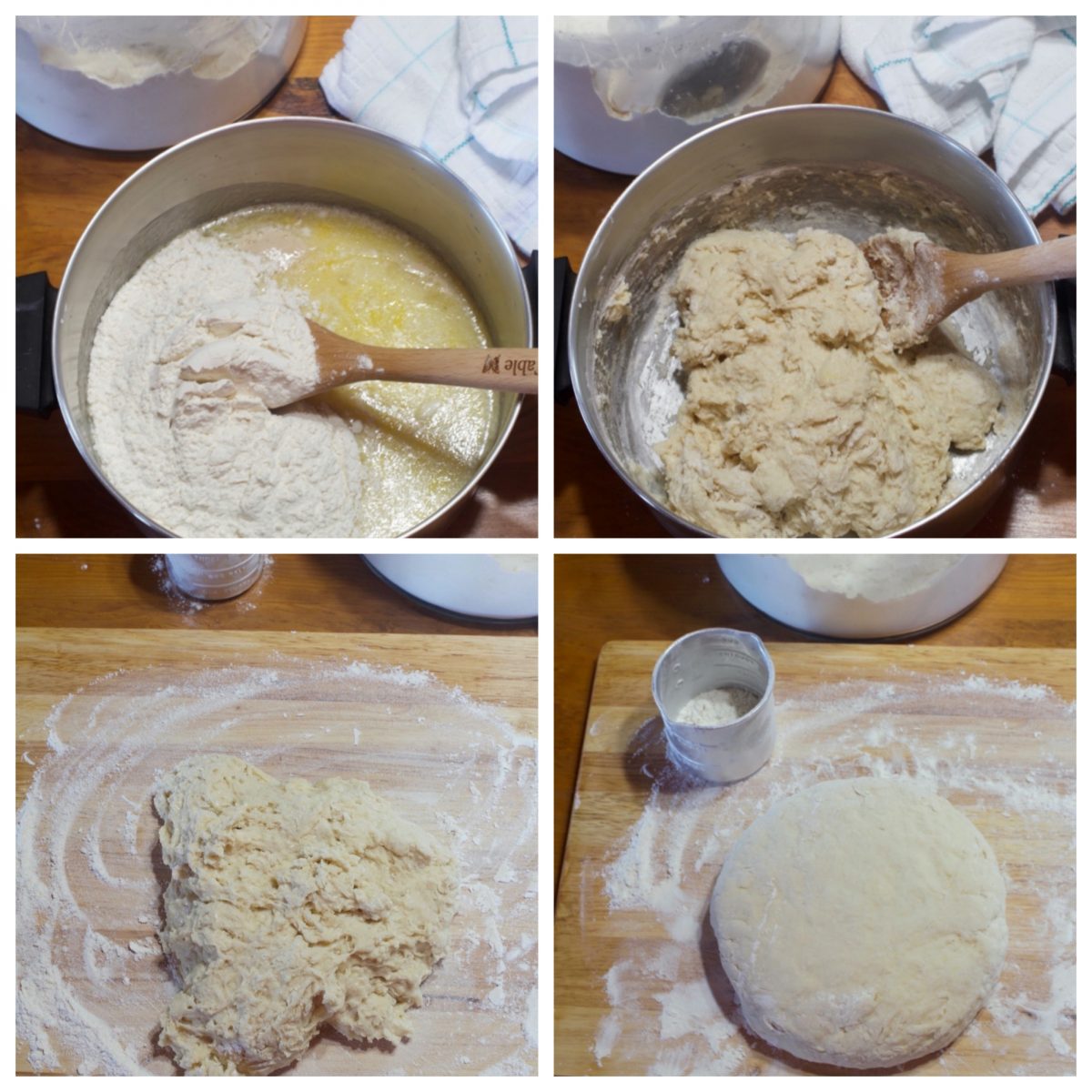 Top Left – I brought some salt, sugar, milk, water, and solid shortening to a boil over medium heat then cooled it.  I added a beaten egg and the yeast mixture, then slowly added flour one cup at a time and mixed it with a wooden spoon.

Top Right – I stopped adding flour when the dough held together but was still wet.  The recipe calls for 4 cups of all-purpose flour.  I used about 3 1/2 cups and saved the last 1/2 cup for working into the dough once I dumped it onto my work surface. 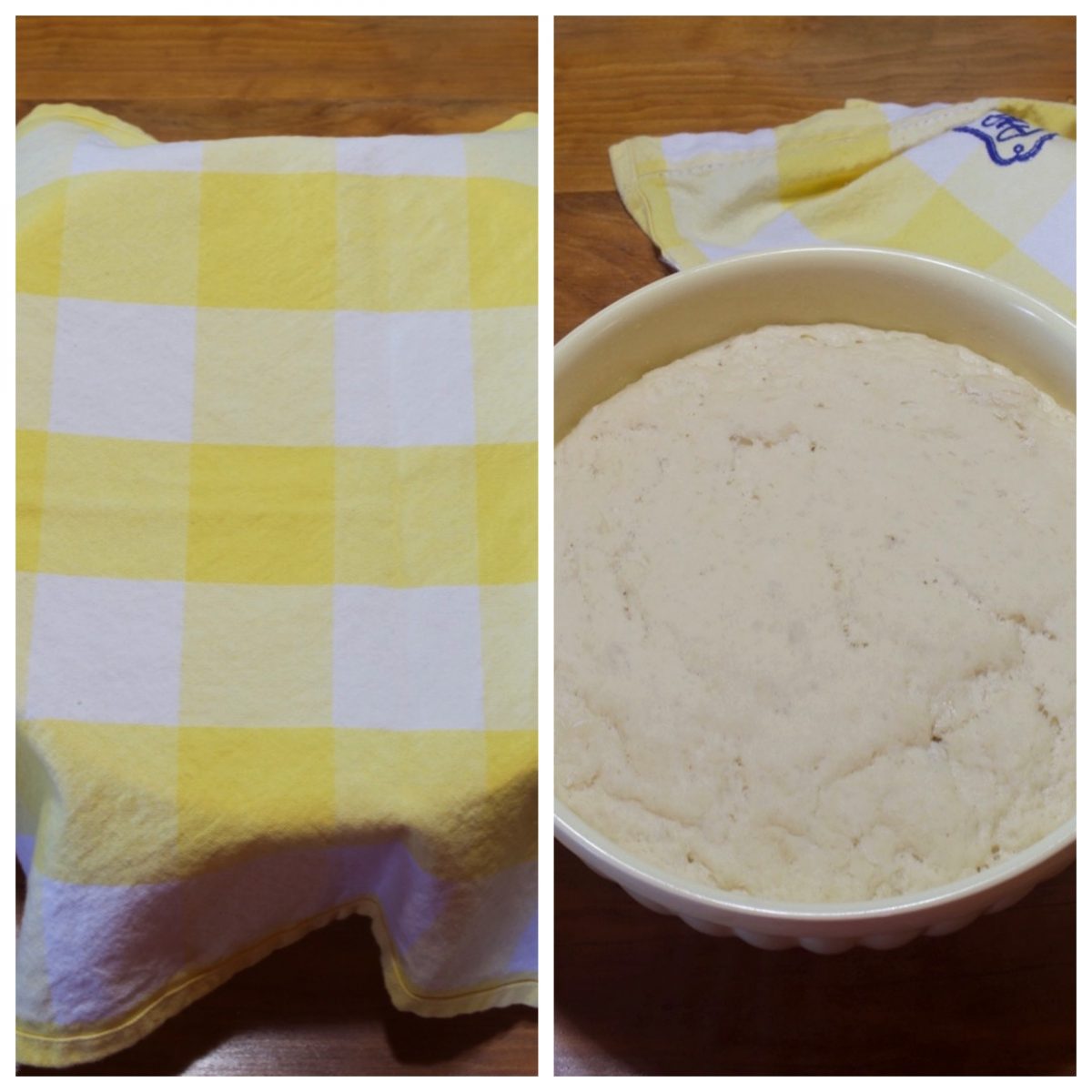 Left – I placed the ball of dough into a greased bowl, turning it once so that both sides were greased, and covered it with a towel.

Right – I placed the bowl in a warm oven and allowed the dough to rise until it was almost doubled in size, about 1 hour.

Temperature – Once the yeast dough is made, it needs a warm place to grow.  Here’s my easy tip for that.  I preheat my oven to 160 degrees and turn it off before I start the recipe.  By the time I prepare the dough, the oven is just nice and warm.  This is a perfect environment for the yeast to grow. 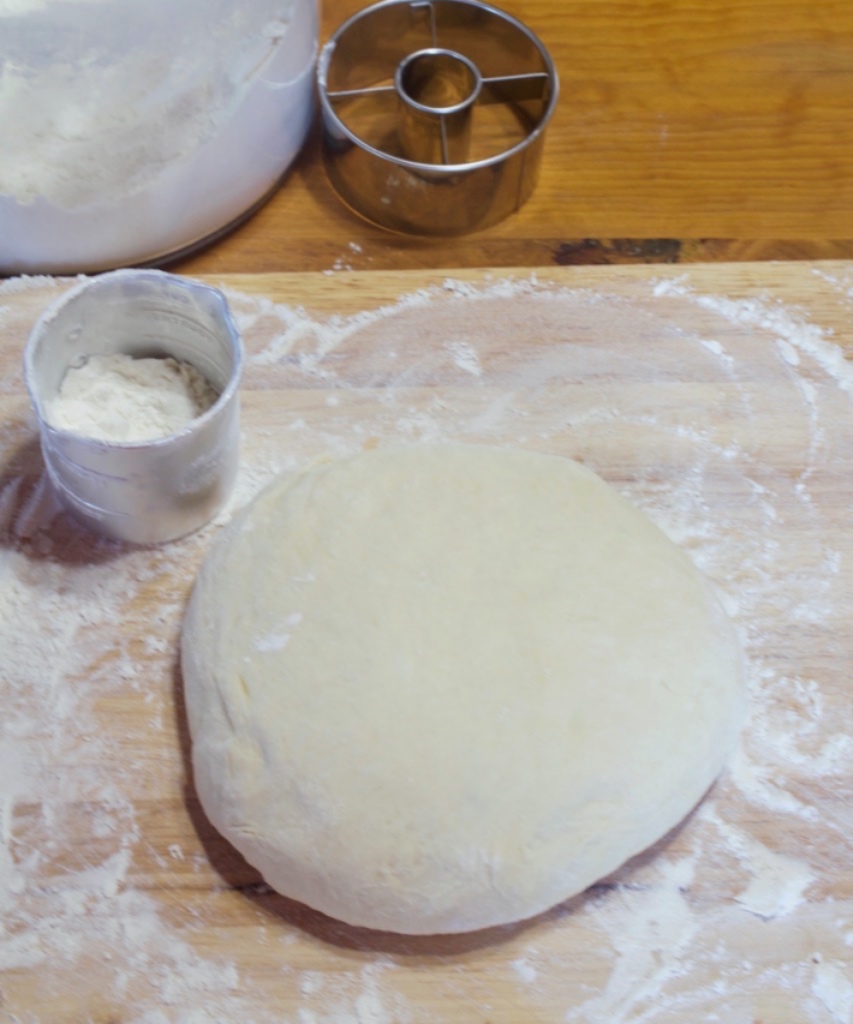 Once I allowed the dough to rise for the first time, I punched it down and transferred it to a floured surface, and dusted it with a little more flour. 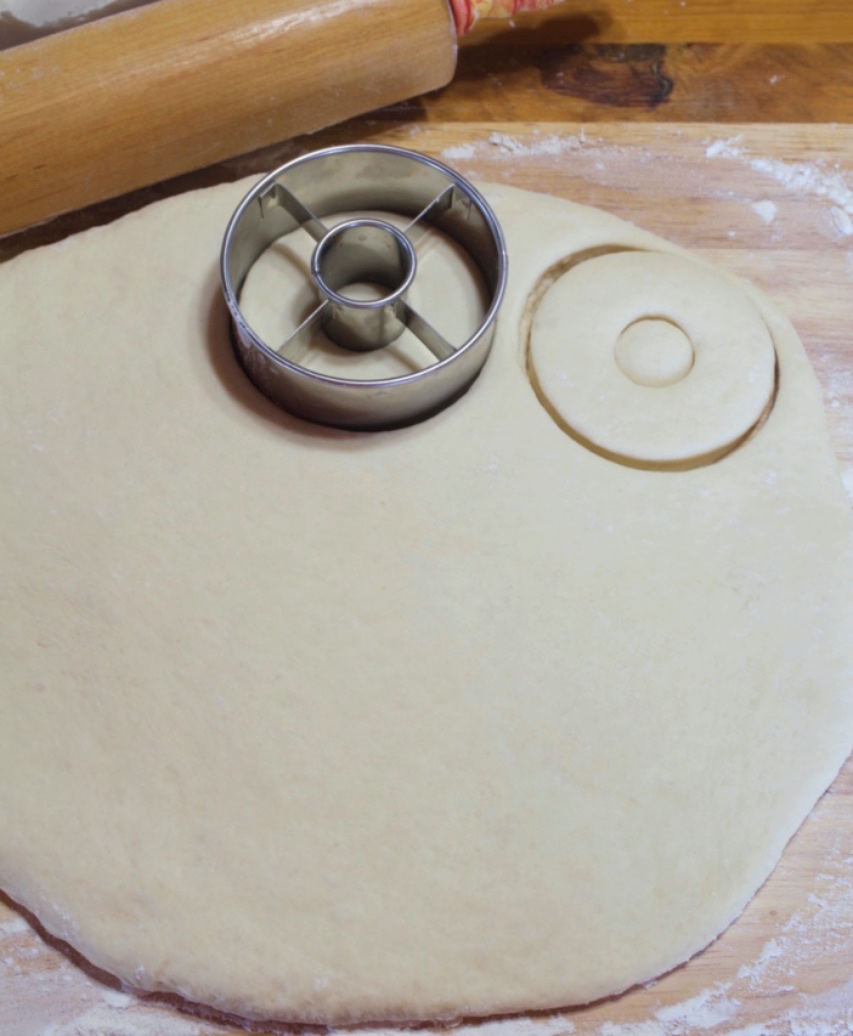 I rolled the dough out to about 1/3 inch in thickness and cut out my doughnuts.  Next, I placed the doughnut cutouts on a parchment-lined cookie sheet and placed them back in the warm oven, allowing them to rise a second time.  The second rise only took about 40 minutes. 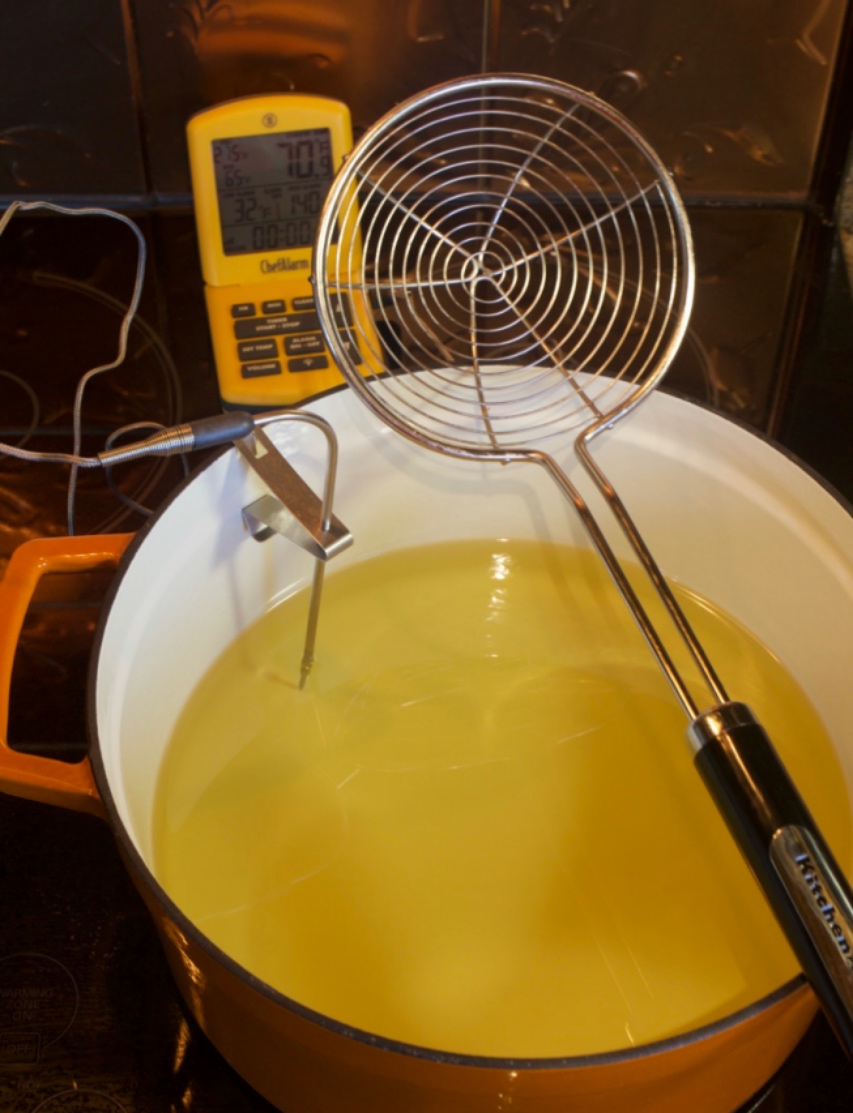 Once the donuts were almost finished with their second rise, I heated some canola oil in my dutch oven.  The oil needs to be at 350 degrees.  I used a thermometer to ensure the oil was hot enough.  I dropped a donut hole in the oil to test it. 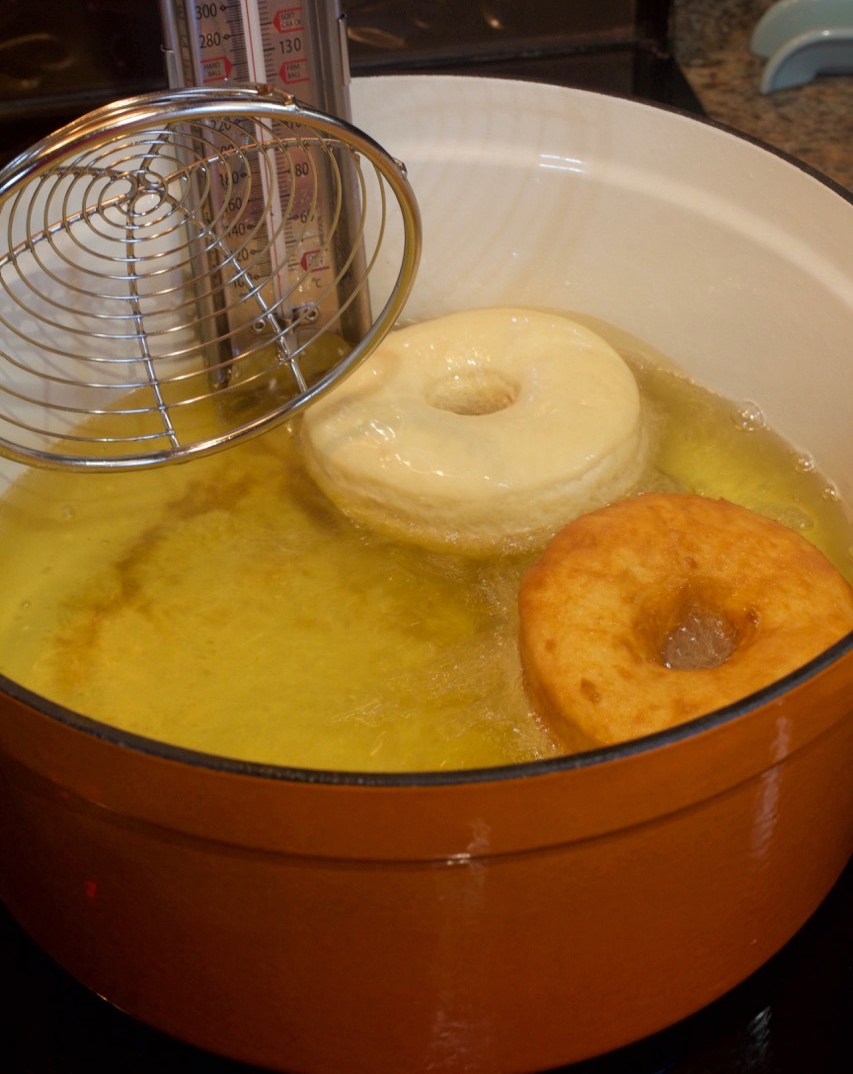 I used a spider for lifting the doughnuts from the hot oil.  However, any large slotted spoon would work as well.  I transferred the hot donuts to a wire rack that I had placed on a parchment-lined cookie sheet. 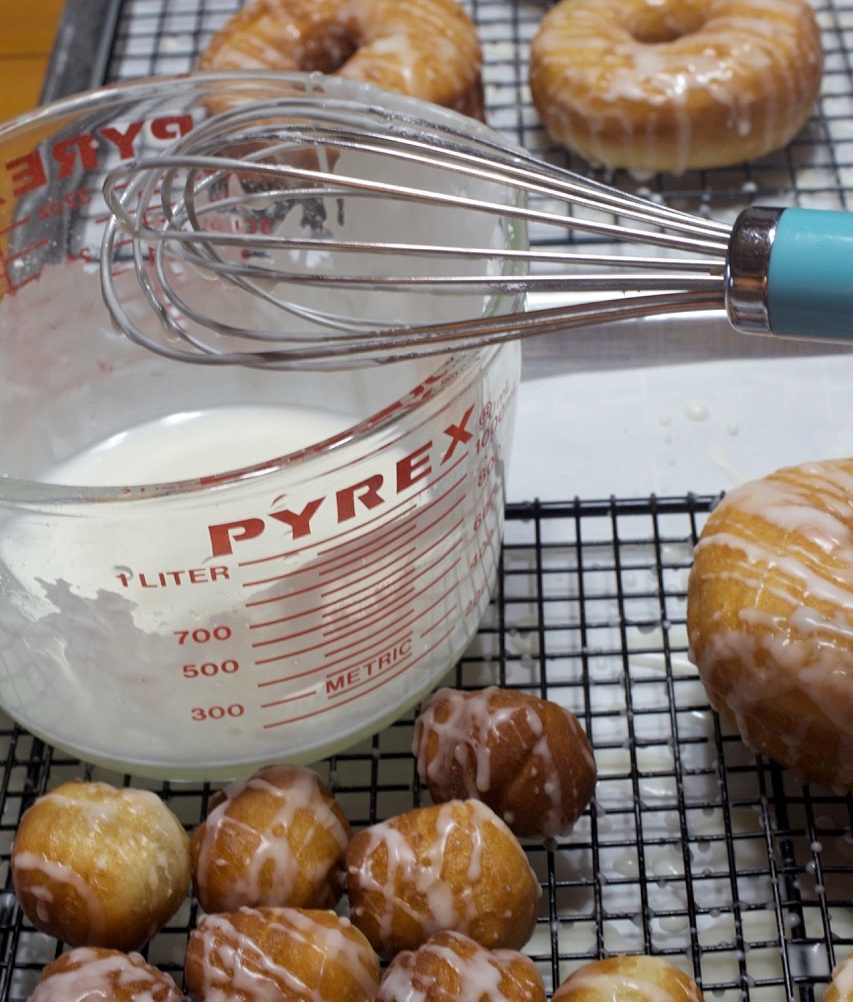 The glaze is super easy.  I simply whisked together some milk, salt, and powdered sugar, making a thin glaze. 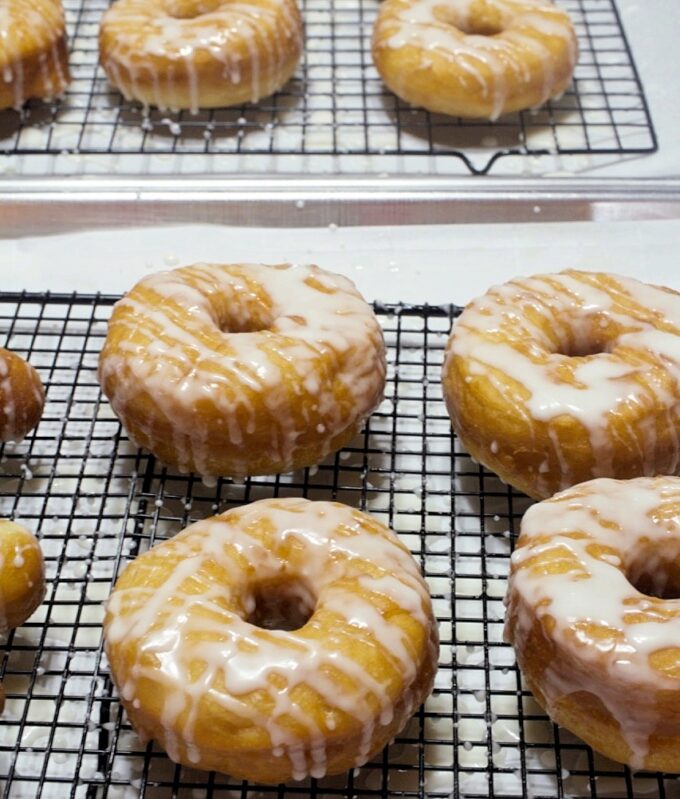 I used my whisk to drizzle the glaze back and forth over the donuts.  The rest is sweet history!! 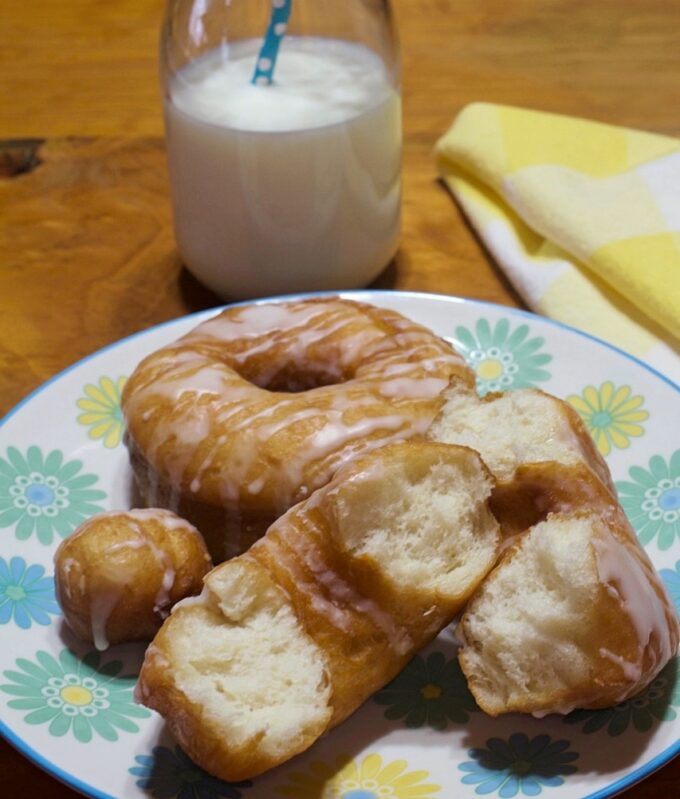 Check out these other great breakfast recipes…

These light and airy glazed yeast donuts get drizzled with a simple sugar glaze and they are melt-in-your-mouth delicious.  I promise!

If you have never made homemade donuts, take a minute to look at the pictures and tips above before starting this recipe.  They are not hard to make, so don’t let the steps intimidate you.

Preheat oven to 160 degrees and turn it off.

There may be affiliate links in this post. We are a participant in the Amazon Services LLC Associates Program, an affiliate advertising program designed to provide a means for us to earn fees by linking to Amazon.com and affiliated sites.
Breads Breakfast Desserts Recipes 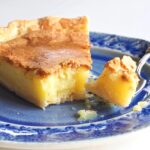 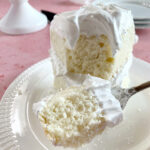 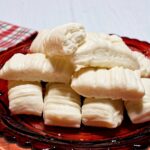